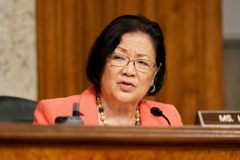 (CNSNews.com) – Sen. Mazie Hirono (D-Hawaii) said Wednesday that in light of Supreme Court Justice Stephen Breyer’s formal retirement announcement, she’s looking for a Supreme Court justice who will consider the “real-life impact” of their decisions and “who are not eagerly trying to get rid of decades of precedent that would protect a woman’s right to choose and voting rights.”

“What I'm looking for is a justice who can be fair and impartial and who does not have an ideological ax to grind, which is what we saw as far as I'm concerned in President Trump's nominees, including two to the Supreme Court,” the senator told MSNBC’s “The Beat with Ari Melber.”

“So, yes, I'm expecting a fight, but there you have it, and I'm looking forward to someone who's going to be not only highly qualified as all of the people you already talked about are, but who really bring to the judiciary the kind of diversity that I’d like, someone who will consider the impact, the effects of whatever decision-making is on people in our country so that they are not making decisions just based on -- which I would like them to base it on law, which would be nice and precedent - and who are not eagerly trying to get rid of decades of precedent that would protect a woman's right to choose, for example, and voting rights, et cetera,” she said.

“But I would like a justice who also would take into consideration the real-life impact of the decisions he or she will be making,” Hirono said.

She thanked Breyer “for his decades of service on behalf of the people of our country and the kind of judicial temperament that he brought and how he approached the decision making.” She said she’s “very much” in support of President Joe Biden’s decision to nominate a black woman on the high court, adding that it’s “about time.”

Civil rights lawyer Maya Wiley said that “it’s critically important to note” that “every single one of these attorneys” on President Biden’s list of possible nominees “are highly qualified - not just qualified but highly qualified.”

“And remember that Donald Trump throughout the process that had the American Bar Association qualify people he appointed? That was something we always had as a neutral, nonpartisan way of ensuring that anyone who is brought before the committee has been vetted by the profession to say this person is qualified,” she said.

“What’s so important to note here is that the one thing we should not hear in this process is for any one of these candidates who has not sat on the bench yet, that that somehow means they're unqualified, because frankly, even if we look at all of the chief justices that have served on the Supreme Court, out of 17, the last 17, 9 of them never served on the bench and they've all been white men,” Wiley said.

“So I think the point here is to make sure there is no double standards, that we're looking at qualification. That does not require service on a bench somewhere in the country, and recognize that, frankly, even the other eight, very few of them had even very much experience on the bench. The question is, how well do you understand the law?” she said.

“How much can you do something that even Justice Sandra Day O'Connor, a Reagan appointee noted, which is the importance of bringing your experience of the world to the bench, and it's one of the reasons why it's high time and past time as the senator said for a black woman. We need that experience on the bench,” Wiley said.