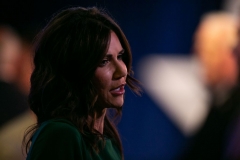 That’s up to the states and people, she said, which is why she and other Republican governors are suing the Biden administration now that the Occupational Safety and Health Administration (OSHA) issued an "emergency temporary standard" Thursday compelling private sector companies to do just that.

“Here's the fact is that Joe Biden doesn't have the authority to do this. It's unconstitutional for him to come in and put these mandates in place so whether it's mandating for a vaccine or for testing, this isn’t his role. That specifically was left to the states and to people in protecting their personal freedoms and making sure they have the opportunity to make the best decisions for themselves,” Noem told Fox News’ “Hannity.”

“So that's the whole discussion here is that when President Biden and his administration announced they would come forward with this mandate, I very quickly said that if he brought these regulations like today I would see him in court because he doesn't have this authority as president of the United States,” she said.

When Noem ran for governor, she promised the people of South Dakota that she would protect them from federal government intrusion,” she said, “and exactly what we are doing today is America versus Joe Biden or Joe Biden versus America, because several governors and states are joined together, and we’re filing litigation in the morning, and we will see him in court, and we will win.”

The governor accused the Biden administration and Dr. Anthony Fauci, director of the National Institute for Allergy and Infectious Diseases (NAID), of promoting a socialist agenda and using COVID-19 as a weapon to take away the freedoms of the American people.

“They are trying to control them through fear to promote an agenda of socialism. That's at the end of the day what this is. This is promoting socialized medicine in the United States of America. That's why it's so important that we as governors, that we as states stand up and make sure we protect our people,” she said.

“I trust the people of South Dakota. I’ve got all the faith in the world in them. They make the best decisions for themselves and their families, especially when the federal government comes in and tries to do something they have no authority to do, we will fight them,” the governor said.