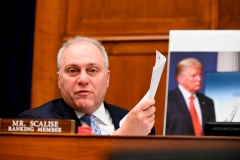 Scalise, who was shot during practice for a congressional baseball game in 2017, said he wouldn’t be alive if not for the men and women of law enforcement.

“The left wants to defund the police. This is personal — I wouldn’t be here without the bravery and heroism of the men and women in law enforcement who saved my life. President Trump stands with those brave men and women. Joe Biden has embraced the left’s insane mission to defund them. There won’t be an America to leave to our children and grandchildren without those brave law enforcement officers and first responders,” he said on the first day of the Republican National Convention.

Scalise said that after he was shot “by a leftist gunman,” that same night, Trump and First Lady Melania Trump came to the hospital and consoled his wife.

“They were there for my family in my darkest hours. Donald Trump would call to check on me throughout the following weeks, just to see how I was doing. That’s the kind of person he is. That’s the side of Donald Trump that the media will never show you,” the congressman said.

“Joe Biden has made a career in Washington for 47 years promising things he’s never delivered. In just three short years, President Trump has delivered huge wins for American families. While Joe Biden made hollow promises when he chaired the Senate Judiciary Committee, Donald Trump took action, and delivered criminal justice reform. Joe Biden claims to care about the working man, but millions of good manufacturing jobs were shipped overseas during the Obama-Biden years, to countries like China. Donald Trump brought those jobs back,” he said.

“I’ve seen how deeply President Trump cares about rebuilding our evaporating middle class. President Trump pledged to give the forgotten men and women of America a real shot at the American dream, and again, he delivered: the lowest unemployment rate in over 50 years, women creating small businesses at a record pace, wages rising the fastest for the lowest income levels,” Scalise said.

“What can Joe Biden say to that? What has Joe Biden done in his 47 years in Washington that can compare to that? President Trump has delivered for the hardworking people of this great nation. It’s going to take that kind of bold leadership to get us out of this COVID crisis,” the congressman said.

“After President Trump saved lives by shutting down flights from China and Europe, he is now focusing the full weight of the government on a revolutionary plan to cure this virus by cutting red tape and empowering scientists to create a vaccine. This is visionary leadership in action, at a time when we can’t afford another 47 years of hollow promises,” Scalise said.

“America has been through tough times before. Who better to lead us out of these times than the president who already built the strongest economy our country has ever seen? Donald Trump did it before. Donald Trump will deliver for us again,” he said.