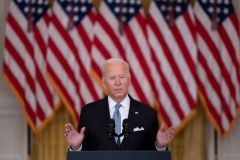 President Joe Biden speaks about the Taliban's takeover of Afghanistan from the East Room of the White House August 16, 2021, in Washington, DC. (Photo by BRENDAN SMIALOWSKI/AFP via Getty Images)

(CNSNews.com) - Rep. Michael Waltz (R-Fla.), a former Green Beret who served in Afghanistan, on Wednesday accused the White House of not being honest with the American people about what is really going on in Afghanistan and that it contradicts what he and his colleagues are hearing in private briefings.

“We’ve received a series of briefings the last several days, Sean, and it is very clear that this White House is not being honest with the American people. We’re hearing very different things behind closed doors from these briefers. The Defense Department in no uncertain terms told Biden and his White House to leave a residual force behind and to not do this,” he told Fox News’s “Hannity.”

“The intelligence community was clear that Al Qaeda 3.0 will come roaring back with the Taliban, that they are married at the hip and fully intend to attack the United States again, and finally we have Americans right now not just behind enemy lines in Kabul, but outside of Kabul, and there is a capability to go get them, but the White House isn't authorizing it,” Waltz said.

“Am I hearing you correctly? Is that the information that they are sharing with you is being directly contradicted publicly by the White House, that they are lying to us, they’re not being totally honest? Is that fair?” host Sean Hannity asked.

“Either they are lying, heartless, clueless, or all of the above, Sean, but it is a very different picture from what we are hearing from Jen Psaki and Kirby and from the president of the United States,” Waltz said.

“And then all of us congressional offices that are dealing with people directly on the ground know that people aren’t being allowed through the checkpoints, know that they’re being stopped at the gates, know that we just had an incident today where the Taliban took their cell phones and smashed them and turned them back around,” he added.

“They are painting this everything is fine, hunky-dory picture, but we know the reality’s different on the ground, and we’re being briefed very differently behind closed doors,” the congressman said.

Voters are more than five times as likely (60%-11%) to think the true state of affairs is worse, rather than better, than the Biden Administration is saying. One in four (25%) say it’s “about the same.”