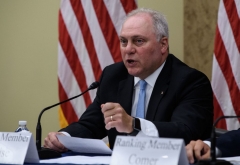 Employers added 194,000 jobs in September - well below the 500,000 that economists expected. Biden blamed the Delta variant.

When asked why he thinks last month’s jobs report was so disappointing, Scalise said, ”Well, really, if you look at all the policies under President Biden -- I mean, the inflation that we're seeing, but paying people not to work is still a major drag on the economy.

“Some of the other welfare programs that they set up earlier this year making it easier for people to stay at home rather than go get a job when every employer you talked is looking for workers, and then you top on top of that the regulations that they keep adding, agency after agency going after small businesses, making it harder to keep the supply chain moving,” he said.

“All those things are adding up and they're all self-imposed by President Biden who walked in with three vaccines and an economy primed to take off, and yet it's been disappointment after disappointment every month because of this failed Biden agenda,” the congressman said.

Host Chris Wallace pointed out that the boost in unemployment benefits from the federal government ended on Labor Day, “but it didn’t seem to make a difference when it ended.”

“But that's not the only thing that they added. They added a number of other welfare programs, and they got rid of the welfare to work requirements. You go back to Bill Clinton. It was a very successful tool to get people back into the workforce. Joe Biden helped undermine a lot of those successful efforts, too. So, it wasn't just one thing,” Scalise said.

“It was many things, and they're all lining up and catching up with this economy, and it's -- again, he could reverse it right now, but he doesn't want to. They keep doubling down on this far left socialist agenda,” he said.