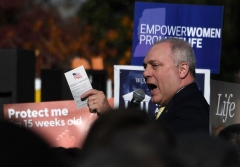 Rep. Steve Scalise (R-LA) speaks in front of the US Supreme Court, in Washington, DC, on December 1, 2021. - The justices weigh whether to uphold a Mississippi law that bans abortion after 15 weeks and overrule the 1973 Roe v. Wade decision. (Photo by OLIVIER DOULIERY/AFP via Getty Images)

(CNSNews.com) - Rep. Steve Scalise (R-La.) said Wednesday that he’s never seen a Democrat apologize for something that they’ve said, yet they go after Republicans for saying something offensive.

“So the other night on the House floor was not my first jihad squad moment," Boebert told a crowd in November. "I was getting into an elevator with one of my staffers, and he and I were leaving the Capitol, we're going back to my office and we get in the elevator and I see a Capitol Police officer running hurriedly to the elevator. I see fret all over his face. And he's reaching. The door is shutting. I can't open it.

"What's happening? I look to my left and there she is, Ilhan Omar, and I said, 'Well she doesn't have a backpack, we should be fine,'" Boebert continued. "So we only had one floor to go and I say, do I say it or do I not? And I look over and I say, 'Look, the jihad squad decided to show up for work today.' Don't worry, it's just her staffers on Twitter that talk for her. She's not tough in person."

Boebert apologized for her remarks on Nov. 26 on Twitter:

"I apologize to anyone in the Muslim community I offended with my comment about Rep. Omar. I have reached out to her office to speak with her directly. There are plenty of policy differences to focus on without this unnecessary distraction,” she tweeted.

“First of all, if you look at what Lauren Boebert said, she came back and apologized, and I do think this gets lost too often, because we’ve had members of both sides that have said things that we disagree with. I don’t know if I’ve seen a time where a Democrat’s apologized for their statement,” Scalise said.

“Lauren apologized for what she said, and the fact that on the Democrat’s side they want to only go after Republicans, they don’t even ask their own members to apologize for things that were said let alone go after their members,” the congressman said.

“They want it to be a one-sided thing, and I think that hypocrisy is showing, so let them call out what they see wrong as we do, but when a member apologizes, I think you ought to respect and appreciate that, and ultimately, call for a higher standard, but it starts with the members themselves acknowledging if they said something that they shouldn’t have to come and apologize for it and then move on,” he said.

As CNSNews.com previously reported, Omar herself was forced to apologize for anti-Semitic remarks she made on social media.

On Feb. 10, Omar, a Somali-born American Muslim, tweeted about critics of her attacks on Israel, "It's all about the Benjamins baby." That same day, when asked who was "paying American politicians to be pro-Israel," Omar tweeted, "AIPAC!" in reference to the American-Israeli Political Action Committee.