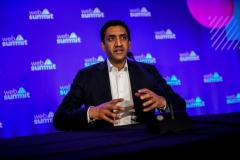 (CNSNew.com) – Rep. Ro Khanna (D-Calif.), deputy whip of the Congressional Progressive Caucus, said Monday that the House will vote on both the bipartisan infrastructure bill and the $1.75 trillion reconciliation framework this week despite Sen. Joe Manchin’s (D-W.Va.) continued opposition to the president’s Build Back Better agenda.

“This sounds to me like a major concession from the Progressive Caucus because originally, you guys said you're not going to take up the infrastructure bill until you pass both, the Senate passes both of these bills at the same time, but now you're willing to go ahead and take up and consider both of these bills without a firm commitment from the Senate. Is that right?” host Wolf Blitzer asked.

“Wolf, we are willing to compromise and the difference has been the president. He has sat down with many lawmakers for hours on end and he has said that based on his conversations on this framework, he is confident he can deliver the senate and we take him at his word. I believe he has the experience to deliver that. We want to be part of the president's success and we want to deliver for the American people,” Khanna said.

BLITZER: So I just want to be clear, regardless of what senator Manchin says or does this week, Progressives like you in the house are going to vote yes on the infrastructure bill and the other bill this week. The infrastructure bill, as you know, will immediately then go to the president's desk because the senate already passed it with 69 votes and he will sign it into law. The question is what's going to happen in the senate to the other broader social agenda bill. What do you say about that? Is that your plan?

KHANNA: Yes, Wolf. We will vote on both bills and it's going the make a huge difference. It will be the largest climate investment in the history of this country. It's going to actually tackle inflation by increasing our productive supply. Right now, we need more money for ports and supply chains. It's going to make sure that women and men can get back into the workforce by finding childcare. These are good policies. Progressives are behind both of them. Then it's up to the senate to make good on their word.

BLITZER: So no matter what senator Manchin says or does in the coming days, you're going to vote on both of these bills this week. Do I understand you correctly?

KHANNA: That is what we want. Obviously it's the speaker who has to schedule the vote, but we're prepared to do that and senator Manchin's position hasn't really changed. I mean He's been saying some of these things. I'm confident that the president believes at 1.75 billion and with these provisions of the framework, he can get it through. I believe he will get it through when you have the whole house vote for it when you have the president, the speaker, the majority leader. When it actually comes for a vote, I believe all 50 senators will be there.

BLITZER: Do you believe Manchin is acting in good faith?

KHANNA: He's representing his constituency Wolf. He's always be straight with me. My view is that we're going to get there and I believe that he has been negotiating with the president. The president believes he can get him to a yes. The president could have come to us many times before and said I have the 50 votes. He could have come Months before. He never did that. He was very cautious. He never wanted to give his word on something that he couldn’t deliver.

President Biden has been in politics for over 40 years. He doesn't just give his word easily. He came and he said I finally believe we have a framework we can get behind. We have to trust him. In this country, we have to start trusting people to get something done for the American people. The Progressives are willing to take that leap of faith. We're putting the party first, the country first.