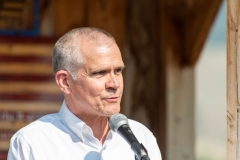 “This is all part of their emphasis on the New Green Deal, and it is not going to lower the energy prices one penny for the people across Montana, I will tell you. They have pulled -- stopped permitting. They have stopped leasing,” he told Fox Business’s “Mornings with Maria Bartiromo.”

“They have imposed the ESG standards as Fred Lane was just speaking about so that my drillers and refiners are having difficulty accessing funds and capital to make sure that they can do their work, and this is all decisions by this administration, and it has driven the cost of energy up dramatically,” the congressman said.

“Wind farms are great, but I will tell you something. They are not going to fuel the trucks that are putting $1,500 a day worth of diesel fuel in their tank in order to get freight moved back and forth across the country,” Rosendale said.

“It's not going to help my farmers as they need that diesel fuel to go across those fields, and it certainly isn't going to help the people that live in Montana that regularly drive 150 miles a day,” he said.

When asked how long it would take this Green New Deal that the Biden administration is envisioning to take, the congressman said, “I'm really concerned, Maria, because there's no action that's being taken right now to start turning back this administration's destruction that they've taken on the energy industry, the fossil fuel energy, their oil.

“If they really want to do something, let's make it easier to permit a new refinery. There hasn’t been refineries built for this country in years,” Rosendale said.

“Let's go ahead and start permitting the pipelines so that we can distribute these products across the country, and none of those steps are being taken, so unfortunately, your commodities experts will tell you that their prices are going to continue to rise, because we are not seeing actions taken right now in order to turn it back,” he said.

The congressman also said that President Biden’s assertion that wind power is a boost to U.S. security is wrong.

“It isn't. The most effective wind farms only can produce energy 42 percent of the time, and so we have a lot of other time - 58 percent of the time that we are not getting energy. We have to back that up with something, and that's just for your households. That doesn't include all the other things we were just talking about,” he said.

On the border, the congressman said that Biden hasn’t said “a single word” about China pushing fentanyl through Mexico into the United States and the drug cartels making money off of it.

“This is the chemical attack on our country from China through our southern border, and unfortunately, Secretary Mayorkas has done nothing about it. I really do believe that he's violated his oath of office. Our border is wide open. We had 105,000 deaths in our country last year from drug overdoses,” Rosendale said.

“The vast majority of that was from fentanyl and this can all be stopped, Maria, and they're not doing anything about it. As a matter of fact, they are inviting people in, and they have -- they have taken our Border Patrol agents and converted them to travel agents,” he said.

On the Biden administration’s threat to pull funding for free school lunches from public schools unless they implement policies on transgender students, the congressman said that his superintendent of schools is fighting back against this.

Rosendale said that there’s a school district in his state that has decided not to accept federal funding “because they will not have the federal government trying to groom their children and so they are not going to follow these policies.”