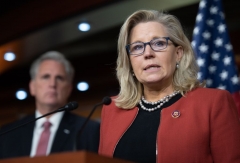 In an interview with “Fox News Sunday,” Cheney was asked whether it bothered her that there was more outrage among House Republicans to her vote to impeach President Donald Trump than to the years of misstatements by Rep. Marjorie Taylor Greene (R-Ga.).

“Look, I think that first of all, with respect to Congresswoman Greene, we've all been very clear. The things that she has said don't have any place in our public discourse, and we as a Republican conference should deal with that issue. We should have dealt with it,” Cheney said.

“That's not something that the Democrats should be addressing on the floor of the House. We should have dealt with that. With respect to where we are as a party, I think that the vote in conference made very clear, we are the party of Lincoln. We are not the party of Qanon or of anti-Semitism or Holocaust deniers or white supremacy or conspiracy theories. That's not who we are,” she said.

“We believe in conservative principles and conservative values, and we believe in the Constitution and the extent to which if you think about the threat that the nation faces and when you think about what happened on January 6th, I talked to Officer Sicknick's mother this week, and I pledged to her as many of my colleagues have, that we will not forget what happened on January 6th, and the single greatest threat to our republic is a president who would put his own self-interest above the Constitution and above the national interest,” she said.

Cheney accused Trump of trying to steal the election himself.

“We’ve had a situation where President Trump claimed for months that the election was stolen and then apparently set about to do everything he could to steal it himself, and that ended up in an attack on the Capitol. Five people killed that day. That's the kind of attack that can never happen again. Our institutions held, but we all have an obligation to make sure that they continue to do so and don't look past what happened on January 6th. It was just over a month ago,” she said.

When asked whether she would vote to convict Trump if she was in the Senate, Cheney said, “If were in the Senate I would obviously listen to the evidence. I think that that's the role the Senate has as jurors. I would also point out though, Chris that, the Senate trial is a snapshot. There is a massive criminal investigation underway,” Cheney added.

The congresswoman pointed out that there will be “a massive criminal investigation of everything that happened on January 6th and in the days before.”

“There are a lot of questions that have to be answered, and there will be many criminal investigations looking at every aspect of this, at everyone who was involved as there should be, but I stand firmly by my statement. We have never seen that kind of an assault by a president of the United States on another branch of government and that can never happen again,” she said.

Asked for reaction to the Wyoming Republican Party censuring her for voting to impeach President Donald Trump, Cheney said, “I think people all across Wyoming understand and recognize that our most important duty is to the Constitution, and as I've explained and will continue to explain to supporters all across the state, voters all across the state, the oath that I took to the Constitution compelled me to vote for impeachment, and it doesn't bend to partisanship.

“It doesn't bend to political pressure. It's the most important oath that we take, and so I will stand by that, and I will continue to fight for all of the issues that matter so much to us all across Wyoming,” she said.

Cheney criticized House Democrats for removing Greene from her committee assignments, adding that it’s the responsibility of House Republicans to deal with the newly elected congresswoman.

“This is exactly the kind of issue that we should address inside of our conference. If you get into a situation where whoever has the majority in the house decides who sits on committees from both parties, you might as well not have anybody in the minority on any committees. So it should not have gotten to the point that it did,” Cheney said.

“I don't believe Democrats have any business determining who from the Republicans sits on committees but we should have dealt with it ourselves, and I think it's very important that we're absolutely clear that those views and those beliefs do not have any place in our public discourse, and we will want to see action now from Congresswoman Greene that backs up the kinds of words that we've seen over the last few days and the kinds of apologies, but we have to be very clear. That's not who we are as a party,” she said.