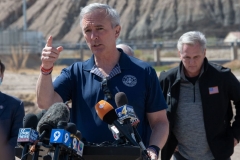 (CNSNews.com) – A delegation of Republican lawmakers toured an immigration detention facility in El Paso, Texas, on Monday, and they found that people who were on the terrorist watch list were being housed at the facility.

“People they've caught in the last few days over there in sector three or monument three have been on the terror watch list. Individuals that they have on the watch list for terrorism are now starting to exploit the southern border," said Rep. John Katko (R-N.Y.), who serves on the Homeland Security Committee.

Katko served as a federal crime prosecutor in the 90s and was charged with going at the drug cartels.

“I had a fundamental understanding then, and I do now that the cartels know when to exploit that southern border, and they are doing it now masterfully. They are doing it, because President Biden rolled back a lot of the previous administrative orders that were working,” he said.

The congressman criticized House Speaker Nancy Pelosi (D-Calif.) for blaming the Trump administration for the increase in illegal border crossings.

House Minority Leader Kevin McCarthy (R-Calif.) said Monday that there were more Haitians in the facility than any other nationality that he saw.

“When you talk about what’s coming across, I just left a few Border agents, and I asked them, ‘who are the individuals you’re catching?’ Yeah, they are from Central America, but you know who else? Iran, Yemen, Sri Lanka. As I walked through the facility, there are more Haitians than any other nationality I saw. Why were they coming now? You asked the Border agents,” McCarthy said.

“They were shocked themselves, because they’re being released into the country. When I talk to the doctor to see when they’re being tested for COVID - when they get out. More than 10% are testing positive, but you’re being stored together. At a time when the president will keep our country closed when maybe we have hope for the 4th of July to get together just with our family, how much spread of COVID is he creating every single day by his policies along this border,” he said.

Katko said that the trip confirmed for him that “there is indeed disorder at the border by executive order.”

The congressman said that the detention facility they visited cost $48 million to build.

“It is so bad from a financial standpoint for Border Patrol that, as Kevin alluded to, they are taking money from future payments down the road later in the year of Border Patrol salaries and Border Patrol pensions just to try and pay for the surge that's going on right now that was caused by this president. They are hoping for a supplemental, but if that supplemental doesn't come, I don't know how the heck we are going to pay these guys,” he said.

The congressman also echoed McCarthy’s statement about the migrants not being tested for COVID-19.

Another thing, they are not testing these individuals. We saw hundreds of hundreds of people in there today, and not one of them has had a COVID test, and they are transferring to other places without a COVID test. Border Patrol agents have only been inoculated 50-60% of them at the most.

So then we went over to monument three, right around the hill here, and we saw firsthand what was going on. Kevin alluded to what was going on, hundreds of people a day coming across. We saw gaps in the wall that made no sense. They were almost done, and on January 20th at midnight, they were instructed to stop and now we have vulnerabilities because of that and they are exploiting those vulnerabilities.

And perhaps worse than that,120 agents that guard that area that’s now vulnerable are being pulled away to go deal with, feed and clothe these kids coming across. By the way, when kids come across, if you don't think the drug traffickers are doing it, think again.

Most of them have a piece of tape across their shirt with instructions on who they are, where they’re going and what information to get them and what they need to do. It's very organized, and they’re paying a lot of money per child to get them across.

Katko called on Biden to admit he made a mistake with his immigration policy and go back to the way it was to “keep America safe for all of us.”

“Use that money that we’re wasting down here on our American citizens,” he said.