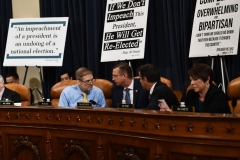 (CNSNews.com) – Rep. Jim Jordan (R-Ohio), who serves on the House Judiciary Committee, called out a group of 50 former national intelligence officials on Sunday reportedly orchestrated by Rep. Adam Schiff (D-Calif.), chairman of the House Intelligence Committee, to discredit Hunter Biden’s laptop and emails as part of a Russian disinformation campaign.

“How can it be disinformation? We have the drop slip Hunter Biden signed. We have John Ratcliffe and the FBI saying it's not Russian disinformation. We have an eye witness saying the emails are real. We have an eye witness who says the big guy in one of the emails in fact refers to Joe Biden and that same eye witness met with Joe Biden about this whole subject area,” Jordan said in an interview with Fox News’s “Sunday Morning Futures.”

“Remember, these are the same people --- the same 50 people who signed this letter are the same people who said the fake dossier is real. Now they're saying the real laptop, the real emails are fake. No one believes them. The only problem is big tech is censoring this information, and not enough journalists are doing their job so Americans can find out what really happened. It's all true,” he said.

Rep. Doug Collins (R-Ga.), a member of the House Judiciary Committee, said that former CIA Director John Brennan and former DNI James Clapper “are right in the middle” of the coup to take down President Donald Trump.

I mean what we've seen everywhere leads back to the folks who are trying to cover their own tracks, and Jim’s right about this,” Collins said.

Why is it that the New York Times can report about the president's tax returns and things like that that they were given to report that they didn't name the sources and stuff, but yet the Twitter didn't censor them, but yet Twitter and other social media are censoring the New York Post for actually posting the truth about Hunter Biden. This is an up and down world,

This is why the media is so disliked and why they are trying to bend this election for Joe Biden. Understand what we're in is sort of an Orwellian Alice-in-Wonderland kind of thing right now. Up is down, and down is up.

Brennan and Clapper and all of these folks, Comey, all of the rest of the coup do not want you focused on what they did, so they are trying to continue this narrative, and look if Adam Schiff is saying it, who’s believing it? He said so many things that are false.

If his lips are moving, he's not telling the truth most of the time anyway. Collusion in plain sight. We can go back. Jim and I have been saying this for too long. It's time to clear this up and hold those accountable right now.

Jordan noted that these are the same people who “told us that there was supposed collusion between the Trump campaign and Russia, between President Trump and Russia, when in fact, they knew, they knew it wasn't true, and we know, we now know they knew it wasn't true, because Ric Grenell released the transcripts that proved there was no proper predicate for launching this investigation in the first place.”

“So these people have misled the American people for four years now, and they're trying to do it again here just nine days before an important election,” he said.

Collins pointed out that when he and Jordan and others were fighting the president’s impeachment, the FBI was “slow walking” Hunter Biden’s emails.

The congressman called for FBI Director Christopher Wray and CIA Director Gina Haspel to be fired.

“It's time for Chris Wray, and frankly, if Gina Haspel, if the CIA is actually slow walking this information, they need to go, because if they had this laptop, last December, when Jim and myself and so many others were out there fighting hard, showing Quid Pro Joe, showing what was happening in the Ukraine, that it was not the president, it was them, if they had this information then, I am appalled that we did not get that on the Hill,” he said.

“That should have been something that should have been investigated back then instead of us just finding out about it now. That's the problem that’s wrong right now,” Collins said.
Jordan’s staff independently authenticated Hunter Biden’s emails, host Maria Bartiromo pointed out.

“No, Maria, they are as real as real can be. We have the eye witness Mr. Bobalinski, who said, these are authentic. These are real. The big guy in these e-mails does in fact mean Joe Biden, and he himself had spoken to former Vice President Biden. So, this is as real as it gets, and here is the fundamental question,” Jordan said.

“Why won't Joe Biden say they're not real? If they're not accurate, if these aren't accurate e-mails, why won't the Bidens say so, and why, frankly, why won't the press ask him that fundamental question, that basic question: Mr. Biden, are these actually accurate? Is this Hunter Biden's laptop, and in fact are you the big guy? They won't ask him that question, but the American people know those facts are true,” he added.

“Joe Biden. I mean, it's amazing here. What Jim just wrote down is true, and what is amazing to me is the Biden campaign and the willing accomplices of the media have never denied the authenticity of these documents. They never tried to attack these documents. They just give broad sweeping arguments saying, oh, it's not real, but you know we found out something,” Collins said.

“We talk about in the previous segment with the senator. Biden ain't any kind of matchmaker. I guess the matchmaker was Hunter Biden. Match.com has a competition here, because his job was to go out and make sure that he could get the access through his father who’s the vice president, so he could make money, for Biden, Inc.,” the congressman said.

“This is becoming the concern here, and you made a comment earlier, Maria, about this. Why should this concern people? You're getting, he's asking to be put in the most powerful chair in the world - the president of the united States. And these are the kind of dealings he did as vice president. Everybody should be scared to death of this,” Collins said.

Twitter CEO Jack Dorsey and Facebook CEO Mark Zuckerberg are set to testify before the Senate Judiciary Committee next month. Bartiromo asked what Jordan plans to do about “this cover-up going on by the media.”

“The remedy is legislation we've introduced - Doug and others on the judiciary committee - that we’ve introduced that does a complete overhaul of Section 230, brings back some liability for these folks and will have the incentives in place so that they can't keep censoring conservatives like they've been doing,” the congressman said.

Collins said that he and Jordan have been victims of social media censorship.

“No, Maria, I appreciate it because Jim and I have been the victims, I think we're on the tip of the sphere. They don't want to hear from Jim Jordan and Doug Collins. That’s why they censor us. We had a campaign ad just the other day they took down, because they said it was too sensitive, and it was just simply a campaign ad,” the congressman said.

“When Jim Jordan and Doug Collins tell the truth about this president, who has worked so hard for the American people, who was attacked unmercifully, and they give Joe Biden a pass. That should tell the American people all they need to know about the media giants right now,” he said.