Rep. Jim Jordan: March Was the Busiest Month in the History of the Border Patrol Since They’ve Been Keeping Records 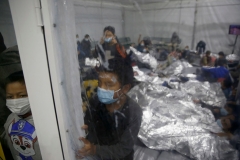 Young children look out from inside a pod at the Donna Department of Homeland Security holding facility, the main detention center for unaccompanied children in the Rio Grande Valley run by the Customs and Border Patrol (CBP), in Donna, Texas on March 30, 2021. (Photo by DARIO LOPEZ-MILLS/POOL/AFP via Getty Images)

(CNSNews.com) –  Last month was the busiest month at the border on record for the Border Patrol since they began keeping data, Rep. Jim Jordan (R-Ohio) said Wednesday.

Speaking to reporters during a congressional visit to the border in Mission, Texas, he said that according to Brandon Judd, president of the Border Patrol Council, the surge at the border is unlike anything they have ever seen.

Even the sheriff of Jackson County called it “complete chaos that we’re witnessing now,” the congressman said. “That is certainly what we have seen over the last day and a half.”

“Yesterday, we saw at the Donna facility one pod, which is supposed to under current COVID protocols house at a maximum 33 children and yet there were 527 kids in that pod alone,” Jordan said.

“So when they say this is chaos and unlike anything we have ever seen, that is true, and it is all driven by policy as we heard loud and clear from all four of the folks who spoke with us members of Congress today - the policy says that we will no longer keep the Remain in Mexico policy in place as we evaluate the claims of people trying to get into our country, the policy says that says we're not going to deport individuals, and of course, the announcement from the current administration saying they won't continue construction on the wall,” he said.

“That is why we see this amazing surge, this unbelievable surge unlike any as Mr. Judd said, unlike any we've seen in the history of Border Patrol. It sort of raised the obvious question, and Scott had said this in the roundtable we just had, raises the obvious question, is this intentional? Is this deliberate? Is the Biden administration deliberately imposing this policy because this is what they want?” Jordan said.

“I don't know what other conclusion you could reach, which is troubling. So the solution is pretty simple. Go back to the policies that were working in the previous administration. That message came through loud and clear over the last day and a half,” the congressman added.