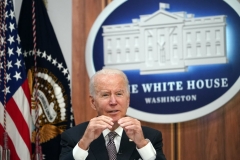 (CNSNews.com) - Even if the world switches to renewable energy, that won’t stop climate change, because climate change has been happening for billions of years, Rep. Greg Murphy (R-N.C.) said Tuesday.

“I was thrilled to buy gas for $4.32 last night. Biden and his administration, the progressive left are chasing this dream that if we all go to renewables, world climate change will stop happening. Let's just be real about this. Climate change has happened on this Earth for billions of years,” Murphy told Fox Business’s “Mornings with Maria Bartiromo.”

“We want our environment to be clean. I mean, who doesn't,” the congressman said.

“We actually ought to be spending - instead of the billions and trillions of dollars of bankrupting the world and America for that matter, rather than be working adaptation and rather than changing things that are really not going to matter at all, and he's actually intentionally - and I think he's even stated this - he's intentionally pushing things up to cause enough pain to force people on to this progressive left agenda, and sadly enough, the American people are the ones who are suffering because of that,” he said.

Murphy questioned who is controlling the presidency with President Biden in charge, and he said he believes it’s former President Barack Obama.

“Well, you know, Maria, from the very beginning, we’ve all had questions about whether he had the vigor or whatever to sustain the challenges of a presidency, whether he's all there upstairs. We have seen a very momentous glimpse of his inability to comprehend, to speak correctly. We all make gaffes every once in a while. Of course, that's part of being human,” he said.

“Who is controlling the presidency, really is the main question. I believe in great part Obama,” the congressman said.

“This is really his third term, and I think the Progressive left has hijacked Biden, and I think his agenda is put forth in front of him to, ‘Hey, you believe this. This is where we’re taking the presidency,’ and I say this is, it's going to be very important because when the November elections come around and Republicans take back the House and the Senate, we have precedent,” Murphy said.

“You know  Clinton in his term when this happened actually pivoted. It's going to be very interesting to see if Biden is able to do this. I don't think he will. I don't think the Progressive left will allow him to do that,” he said.