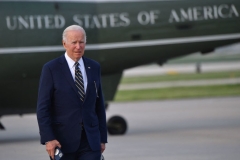 (CNSNews.com) - The Bureau of Labor Statistics’ Consumer Price Index (CPI) rose 8.3 percent in April, down from 8.5 percent in March, but Rep. Andrew Garbarino (R-N.Y.) said that’s no reason for President Biden to celebrate, because inflation is still higher than expected.

“Yesterday he was blaming Republicans. Today he'll blame Putin. Tomorrow, who knows. I had a couple colleagues on the hill yesterday, a couple Democrats kind of celebrating that the CPI was 8.3 because last month it was 8.5, but nobody’s paying attention to the fact that this is still higher than what economists expected,” he told Fox Business’s “Mornings with Maria Bartiromo.”

“This is a problem that has grown exponentially over the last year. It doesn't show any sign of stopping. I don't think anybody should be taking a victory lap, and I think President Biden should be looking inward when he looks at whose fault this is,” the congressman added.

On the border, Garbarino said he hopes President Biden doesn’t lift Title 42 on May 23 as planned, because “it would be a disaster.”

“We already have a huge crisis at the border. If they lift Title 42 on may 23rd it would be a disaster for this country. I'm thankful that the judge continued the TRO this week until the hearing tomorrow on the injunction. Hopefully, he sees that this injunction needs to stay in place. The Homeland Security Department has no plan for the increase,” the congressman said.

“They're saying as many as 18,000 migrants a day coming to the border. I've been down to the border twice. The Border Patrol agents are doing everything they can but they are not prepared. They are not staffed for 18,000 migrants a day. So it's an emergency. It's a crisis down there and the judge needs to keep it in place until we in Congress can pass a law making it permanent,” he said.

When asked whether Biden’s handling of the border is a dereliction of duty and an impeachable offense, Garbarino said, “I think the real focus right now has got to be closing the border. It's got to be securing the border.

“Right now, I don't see with the Democrats in control, they're not going to bring up impeachment proceedings against their own president so we need to focus on actually securing the border,” the congressman said.

“When we take the House, which I think we will in November, these discussions will happen in January, but right now we can't afford to wait that long with this wide open border so Congress needs to do everything it can to hold the homeland secretary accountable because he's definitely not doing his job,” he said.

“We need to do everything we can to make sure the border is secure and shut, because like you said, fentanyl is coming over at record amounts. Illegal immigration is coming over at record amounts. These are not refugees. These are people like MS-13 gang members, you know, these people want to do no good here. They're criminals. And a lot of them are criminals and they want to come over here and continue their crime spree,” Garbarino said.