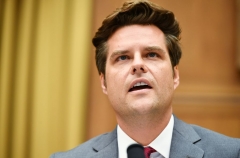 In an interview with Fox Business’ “Mornings with Maria,” Gaetz, a member of the House Judiciary Committee who once served as criminal justice chairman in the Florida House of Representatives, said he knows “this area of law well” and after a conversation with Florida’s attorney general, he believes “a criminal probe may already be under way in Florida.”

Gaetz said that it’s a felony for someone to offer something of value to impact whether someone votes.

“We have a confession document - the memo that the Bloomberg team used to go and get other people to contribute to this effort literally says we are doing this to impact whether or not these people voted. It's not for any felon. It’s not for any circumstance. They are specifically targeting African-Americans, because they believe in Florida, African-Americans will vote 90 to 95 percent for Joe Biden,” he said.

“So this isn’t an exercise in democracy. This is cherry-picking votes, offering something of value for them, and I believe the Florida attorney general has jurisdiction and is current evaluating options for a criminal investigation. One final point. We also have a RICO statute in Florida so that the web of Bloomberg-associated entities could all be brought under the same criminal prosecution,” Gaetz said.

Bartiromo called it “pretty extraordinary that one person can spend $100 million to get somebody elected.” She said if a Republican had done that, “the Democrats would be going insane.”

Gaetz said that based on his conversation with the state’s attorney general, “there are serious concerns about the way that the various organizations were set up for tax purposes, for electioneerring purposes, and, again, the question is whether or not something of value is being offered.”

“When it comes to Bloomberg sort of lighting his money on fire in Florida, I think the last time he had such a quixotic electoral spending endeavor he was trying to find his way on to the debate stage where Elizabeth Warren fed him into a woodchipper,” the congressman said.

“So I think that the Bloomberg political experience hasn't been a universally positive one for him, but here he may have exposed himself and his associates to criminal liability if you're literally engaged in bribery and vote-buying of a specific segment, and what is just so striking is that they literally wrote a memo confessing that their intent was to do this to interfere with an election,” he said.

Gaetz pointed out the irony in Democrats trying to impeach President Donald Trump for Russian interference in the 2016 election when the Democrats are allegedly committing “domestic election interference” to try to get Democratic presidential nominee Joe Biden elected president.

“I heard Nancy Pelosi and all the Democrats wax on for years about this foreign interference and Russia disrupting our elections, but when we have domestic election interference, domestic vote buying, we seem to be a lot less interested on the political left,” the congressman said.

“I'm glad in Florida we have good law enforcement officials like our attorney general willing to pursue it. I hope that we have the same diligence across the country because I think that election interference undermining the election day vote is sort of the new Russia for Democrats. It's the new way to distract from the presidency and to undermine him,” Gaetz said.

“You mentioned the memo. On the memo it reads, ‘we know to win Florida we will need to persuade, motivate and add new votes to the Biden column,’ reads that document. ‘This means we need to explore all avenues for finding the needed votes when so many votes are already determined,’” host Maria Bartiromo said.

“It says it right in the memo, and an adviser to Bloomberg told the Washington Post, ‘Mike wants to get this done for two reasons, one, because it's the right thing for democracy’ - that's paying the fees of felons – ‘and two, because it immediately activates tens of thousands of voters who are pre-disposed to vote for Joe Biden.’ So there you go,” she said.

“It’s one thing to motivate people. It’s another thing to offer them money,” Gaetz said. “When you're motivating people by paying their fines, that's where criminal behavior may be triggered.”