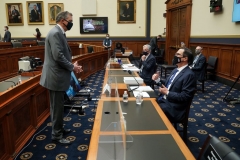 “It's depressing - $30 trillion up $8 trillion over the course of fighting this pandemic, and Americans should be concerned about that, because that's part of the reason why we are fueling inflation by all this fiscal stimulus increasing demand while we have constrained supply and Biden policies to cut supply like in the supply of oil and gas to power American industry,” he told Fox Business’s “Mornings with Maria Bartiromo” on Wednesday.

“Secondly, as interest rates go up, we are going to have more and more of our budget consumed by paying interest on that national debt, one-point increase in the average Treasury rate is about 290 billion plus, which is what we pay every year for the VA. So it's an amazing impact on the federal budget in the negative way. That affects every taxpayer,” Hill said.

Despite the record national debt, Democrats are talking about spending $555 billion on climate, host Maria Bartiromo pointed out. “Is the $30 trillion in debt not an issue for them?” she asked.

“I don't think it's an issue for them. In fact, Mr. Yarmuth of Kentucky, who’s the House Budget Committee chairman, says there's no limit to the amount of money that we can borrow, that we’re the United States. There's no economic impact. We can borrow and borrow till the cows come home,” Hill said.

“It's completely economic illiteracy on the part of the Democrats. Let me say that even as we debate this week international competition with China and the United States on the House floor, Democrats are trying to put in Build Back Better spending priorities in a China bill. So they will not stop their relentless effort to bankrupt our country,” the congressman said.

Asked whether the China bill will get passed, he said, “Here in the debate, there are over 570 amendments I think filed, which tells me right off the bat there's not consensus among Democrats and Republicans about this bill. This is a Nancy Pelosi bill, top down, crammed down that, in fact, enables China.

“It doesn’t help America compete with China. It's the exact opposite as she proposes. It didn't go through committees in the right way, and so I hope it doesn't pass. I don't think it's a good bill. I don't think it's the right bill to make America more competitive and hold China accountable,” the congressman said.

Bartiromo asked what Hill sees in terms of requirements for digital assets and to explain the rules around surveillance of our bank accounts because PayPal and Venmo are sending surveillance information on transactions that are $600 to the IRS. She pointed out that bank account surveillance was supposed to be a dead issue, because it was in the Build Back Better plan, which has not passed through Congress.

“Well, Maria, this is a bad move by the Biden administration on both instances. House Democrats and Republicans are against this digital asset provision that was in the infrastructure bill. We think it sweeps up all kinds of different players in the digital asset issue,” the congressman said.

“Let me give you an example. They want to impose a tax on brokerage of digital assets but the bill does a sloppy job of defining what that is and it includes a lot of people that are not customer-facing brokers. It includes software developers, it includes the miners so Patrick McHenry of North Carolina, Tim Ryan of Ohio have legislation to fix that,” Hill said.

“On the subject of PayPal, that's a breaking news story, and you're right, the $600 surveillance of your bank accounts was a pay-for in Build Back Better. Republicans, citizens all across the country fought back against it. It's not been passed into law, and if the IRS is doing that, they will pay a price when Republicans take back the House and we start an oversight, and I work with Kevin Brady, our chairman of Ways and Means Committee to get to the bottom of that if, in fact, it's happening right now,” he said.