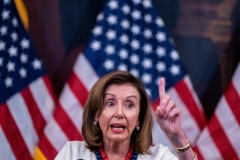 Speaker of the House, Nancy Pelosi, Democrat of California, speaks during her weekly press briefing on Capitol Hill in Washington, DC, on January 20, 2022. (Photo by SHAWN THEW/POOL/AFP via Getty Images)

(CNSNews.com) – Former U.S. Rep. Doug Collins (R-Ga.) said Friday that House Speaker Nancy Pelosi (D-Calif.) warning U.S. athletes not to do anything to risk angering the Chinese government during the Olympics just shows that she doesn’t think the Biden administration could do something “if China acted against one of our citizens there.”

“It's terrible. Just fathom for a moment what Nancy Pelosi just said, though, Maria. Think about this. She's scared of offending a genocidal authoritarian communist government. She has no problem if our athletes go to China or go to the Olympics and protest America,” Collins told Fox Business’s “Mornings with Maria Bartiromo.”

“She’s actually telling our athletes, ‘don't offend the big, bad Chinese government. We’re scared of them. We don't want to offend them,’ and yet ignoring everything that China’s doing. We shouldn't be there to start with in the first place, but really that to me was the most cowardly act I’ve ever seen from a speaker to say, ‘don't offend somebody like China because we are scared of them,’” he said.

The Biden administration chose to boycott the Olympics, but it did not ban U.S. athletes from participating in the Winter Olympics in China.

Host Maria Bartiromo asked why U.S. athletes are even in China if we’re afraid of the Chinese doing something against a U.S. citizen who speaks critically of the Communist Chinese Party.

“Well, it is outrageous, and I think what Pelosi’s statement indicates even further, she doesn't believe the Biden administration could do if something happened. Let's just be honest here,” the congressman said.

“She's implying that the Biden administration and the full force of the American power could not do something if China acted against one of our citizens there. Again, there’s so many things wrong with this Olympics being in China. The place where they are doing most of the events gets less snow than I get in north Georgia. Since when does the Winter OIympics go to somehere where there’s no snow? It just shows the whole problem with this in China,” Collins said.

Bartiromo pointed out that Pelosi canceled a bipartisan committee on China and there has not been one hearing on the origins of COVID-19.

“That's the legacy of these last going on now 3 years of the Pelosi administration in the House and even frankly Schumer in the Senate. They are not doing anything about China. It seems -- that statement she made about athletes not protesting could be held to the speaker and the Democrats in Congress. They are scared of China. They don't want to touch it. It ruins their entire narrative,” Collins said.

“They do not want to hold China accountable, and it just goes back to this intertwined relationship many times that we’re seeing from liberals who don't want to touch these authoritarian dictatorships and especially China. Maybe it’s because of other reasons, but they are not doing it,” the congressman said.

“The American people should be able to see that they have just simply ignored one of the greatest national security risks that we have, and that is in China, and they’ve chose to do anything else except investigate the origins of the virus. They’ve chose to investigate everything else but the genocide in China. It’s just sad,” he said.