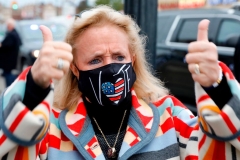 (CNSNews.com) - Rep. Debbie Dingell (R-Mich.) said Thursday that Facebook’s decision to continue to ban former President Donald Trump united Republicans and Democrats in calling for some regulation of social media like protecting children from bullying, people getting misinformation,” and privacy.

When asked what regulation she would like to see around Big Tech and its dominance, Dingell said, “You know, this is a very complicated subject. We have really not seen any changes in the regulations of social media, at all in a long time. The one thing Facebook's decision did yesterday was to unite Republicans and Democrats in calling for there has to be some regulation.

“I actually think there's agreement on some pieces of some policies like protecting children. I myself worry about freedom of speech as we look at all of this, but how do you deal with misinformation?” the congresswoman said.

“How will you deal with the fact that people are getting information from these sites that is actually resulting in things that are contributing to teenagers bullying each other, teenagers committing suicide, people getting misinformation, and I'm very worried about privacy, by the way,” she said.

“People have no idea what information they are giving away about themselves and how that information is being used that will never go back in the bottle again,” Dingell added.

When asked about censorship and whether she agrees with Facebook’s ban on the former president, Dingell said, “I worry about freedom of speech, but I also know that he is contributing to sedition in this country.”

“How is he contributing to sedition? Come on, Congresswoman,” host Maria Bartiromo said.

DINGELL: No, I do believe this. I believe what happened at the Capitol on January 6 was a direct result of his words, and I think -- I mean, that's why I want to see a commission to actually get the facts and understand --

DINGELL: He --Well, he continues. We see what's happening in the Republican Party with Liz Cheney. Who--

DINGELL: I said to Maxine Waters I did not believe that we should be calling violence-- for violence in any way, and in order to make this non-personality..

BARTIROMO: So she should be banned?

DINGELL: So that we don't hear names and get emotional, I think we have to get very strong, straight rules that protect freedom of speech but also deal with misinformation, sharing of lies, contributing to things that hurt the pillars of our democracy. Those are --

BARTIROMO: So then Maxine Waters should be banned then.

DINGELL: I don't think she should be banned.

DINGELL: She did not say that that election wasn't legitimate. She has not encouraged people to go and take over the Capitol.