Rep. Beth Van Duyne: Why Are We Not Looking at Ways Government Has Incentivized Single-Parent Homes? 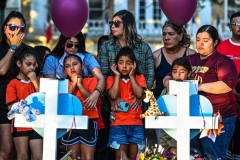 Soccer teammates of Tess Mata, who died in the shooting, cry, supported by their mothers, as they visit a makeshift memorial outside the Uvalde County Courthouse in Texas on May 26, 2022. (Photo by CHANDAN KHANNA/AFP via Getty Images)

(CNSNews.com) - Rep. Beth Van Duyne (R-Texas), speaking about the Uvalde school shooting, told “Sunday Morning Futures” that there needs to be an examination of the ways that the federal government has “incentivized” single parent households.

“You’ve got kids who are spending their time instead of with friends in the outside on social media. You have kids you have shown if you don't have a father in their life, are much more likely to have mental health issues, to have drug abuse, to drop out of school, to be lower in socio-economic wealth. All of those have been proven,” Van Duyne said.

“Why are we not having that conversation? Why are we not looking at ways that the government– that the federal government has actually incentivized these single-family homes. We’re back where we started increasing welfare, increasing entitlement programs. We were actually paying single moms to not have fathers in the home,” the congresswoman said.

“Those are conversations that we need to start having. I think it’s just lazy politics right now to just talk about gun control, gun control without looking at the solutions that actually would have led up to preventing this horrible tragedy,” she said.

Van Duyne said that there were a lot of failures that led to the Uvalde school shooting.

“From the beginning when this kid supposedly was a bully and had social media posts to having police called because he was fighting with his mom. There was a lot of failures that had people stepped in earlier might have prevented this shooting. The question is what do we do moving forward?” the congresswoman said.

“They have shown study after study after study that shows if you have a student resource officer on campus that is armed that could perhaps stop the shooter before he enters the school, that is the best way to be able to prevent this kind of a shooting. That door should never have been propped open. That door should have been locked. We’ve got protocols in place, but if they’re not followed, expect more of this to happen,” she said.

Fox News host Sean Duffy pointed out that the door that was propped open required someone to actually lock it, because it doesn’t have an automatic locking mechanism, and that’s something that should be looked at, he said.

Van Duyne agreed, and she pointed to a bill that Senate Majority Leader Chuck Schumer (D-N.Y.) blocked last week that would have looked at ways of sharing best practices at schools to make them safer with other school districts across the country.

“Absolutely, and this is one of those things that is best practices, and we can look at what those are, but there was a bill that was in the Senate last week that Chuck Schumer blocked that was looking at ways of sharing those best practices at schools to keep them safer with other school districts across the country,” the congresswoman said.

“Democrats have one tool in their toolbox, and when you only have a hammer, everything looks like a nail. Their tool is control. Their tool is to remove our independent rights, our individual rights. That is what you see with this situation here and why so many of my Democrat colleagues seem to be pumping that narrative that this is all about gun control,” she said.

“There were so many failures that happened here. Let’s harden our soft targets. Let’s look at ways that could actually have prevented the shooting instead of politicizing it and making it about the party as opposed to actual solutions,” Van Duyne added.

“I think that we as a society have gotten very complacent,” the congresswoman said, as evidenced by the fact that none of the people that the shooter interacted with online, that he told he was planning something, never tipped off the police.

“We don't think of these things ever happening to us. We don’t think of how we could be able to prevent it. We all need to be much more diligent in what we can do. This shooter's interactions with his teachers, with police, with his parents, with his fellow schoolmates, with people online, there were red flags around this kid everywhere, and yet nobody seems to have done anything about it,” she said.