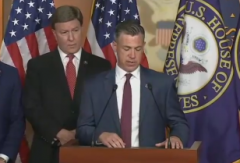 (CNSNews.com) - The Taliban now has access to over $85 billion worth of U.S. military equipment, including more Black Hawk helicopters than 85 percent of the countries around the world and biometric devices with “fingerprints, eye scans, and the biographical information of the Afghans who helped us over the last 20 years,” Rep. Jim Banks (R-Ind.) said at a Capitol Hill press conference Tuesday.

Banks, who served in Afghanistan for two years prior to being elected to Congress, said that as a foreign military sales officer, he was on the frontlines of acquiring the equipment that the Americans provided and turned over to the Afghan army and the Afghan police.

I want to read to you what is so painful for me and so many other Afghan veterans who served in that capacity, others who served as a part of the train, advise, and assist, equip effort in helping the Afghans. We now know that due to the negligence of this administration, the Taliban now has access to over $85 billion worth of American military equipment.

That includes 75,000 vehicles, over 200 airplanes and helicopters. Over 600,000 small arms and light weapons. The Taliban now has more Black Hawk helicopters than 85% of the countries in the world, but they don't just have weapons.

They also have night vision goggles, body armor, medical supplies, and unbelievably, unfathomable to me and so many others, is that the Taliban now has biometric devices which have the fingerprints, eye scans, and the biographical information of the Afghans who helped us over the last 20 years, and here's what we just learned again in the briefing that we just walked out of.

This administration still has no plan to get this military equipment or these supplies back. Instead, it’s all fallen into the hands of the Taliban. There's still no plan to account for what has happened to these weapons.

I can tell you with ranking member Rogers behind me that HASC Republicans will fight next week when we go through the national defense authorization markup to fight for a plan. If this administration, the Democrats aren’t going to do it, we will do it. We will demand a plan to account for all of this military equipment.

Here's what I'm concerned about even more than the Taliban acquiring these weapons. It’s that we know that Al Qaeda and ISIS-K still exist and are growing in Afghanistan, and eventually, they acquire these weapons and as I said before, if any American is harmed or killed and not safely evacuated or if any of this military equipment or weapons are used to harm or kill an American, the blood is directly on Joe Biden's hands.

What’s also painfully clear from the briefing that we just walked out of is that behind closed doors, the Biden team tells us one thing. They admit mistakes. They know this is a dangerous situation going on in Afghanistan, and President Biden tells us something different. He tells us that everything is okay. That it’s under control. So either Joe Biden is lying to us or he’s not in touch with the team that just briefed us in the room, and that’s a shame as well.

Rep. Rep. Michael Waltz (R-Fla.), who served multiple tours in Afghanistan as a Green Beret on the ground, described the way an Afghan interpreter who fought alongside the U.S. military was intercepted by the Taliban and beheaded after they beheaded his family in front of him.

He also said that the president doesn’t realize that the Taliban takeover of Afghanistan means terrorists will once again target Americans at home.

I personally have helped Afghan-- my Afghan interpreters get back to the United States. They’re thriving now as American citizens, but their families are being hunted down as we speak. I’ve also had one that fought with us. His name was Little Spartacus. He was such a fighter.

He was intercepted at a Taliban checkpoint with the very American documentation that he needed to get out of here. They didn’t just kill him. They took him home to his village and beheaded his brothers and cousins in front of him before then beheading him.

I’ve seen school principals run out of town and murdered after they were hunted down. Their crime? Teaching girls, and then the girls’ school was burnt down.

The Taliban have not changed, and what was clear from the briefings, what has been cleared from the months of briefing that our committee have received, our Armed Services Committee, is that a Taliban takeover equals al Qaeda 3.0, and one thing that Joe Biden either won’t admit or doesn’t understand is that what happens in Afghanistan doesn’t stay in Afghanistan.

It spreads like a cancer. It will follow us home, and many of us have been very clear about that danger across multiple administrations. This isn’t about politics. This is about the fact that America now is less safe. Here’s why we’re in even a worse position than we were in 2001, because now we have no bases in the region.

One thing that’s clear from the briefings and we have been asking for months is not a single country surrounding Afghanistan, not one, has agreed to allow U.S. forces to base there, to allow our intelligence, our drones, and other things we need to understand what’s going on to base there, much less to allow legal strikes to keep a lid on al Qaeda and ISIS and others.

The intelligence community has been very clear. They have the will and the intent to hit us again. So as we head into the 20th anniversary, the 20th anniversary of 9/11, we now face the prospect of our soldiers having to go back in. Now they have the Taliban is much heavier, much more heavily armed. Our local allies who have been hunting down.

There is no northern alliance. There are very small elements left still willing to resist, and I can tell you, we’re going to lead that effort from Congress, because the administration won't lead to continue the fight and to continue to keep America safe. This is a disaster on historic proportions, and there needs to be accountability. And that accountability sadly that is going to come from right here.