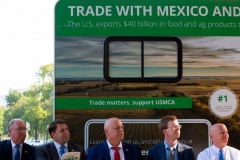 (CNSNews.com) - Rep. Jodey Arrington (R-Texas), who serves on the House Ways and Means Committee, said Friday that the $3.5 trillion spending bill that is being considered in Congress will be “the largest expansion of government” and a “radical reimagination of government’s role in our life.”

“I can tell you that the onslaught of the largest expansion of government and that radical reimagination of government's role in our life has ensued,” the congressman told Fox Business’s “Mornings with Maria Bartiromo.”

“Now whether they can successfully get it across the finish line or not, that's still to be determined, but the fact that you have Democrats breaking rank so early in the process which is very rare, and it's not just Stephanie Murphy from Florida based on process, there are substantive issues that and exceptions that Democrats have taken like Ron Kind from Wisconsin on the mandate for small businesses to expand benefits for employees or they must be fined by their federal government, so we are seeing some fissures here that could cause problems down the road for sure,” he said.

Arrington said he doesn’t think the Democrats are “going to realistically accomplish all of the litany of taxes that they want to levy on the American people - most of which will be born by small businesses and working-class folks, but they’re going the raise business tax rates higher than Communist China, and that's at least in their plans.”

“They have plans, Senator Wyden does to repeal the 20% tax deduction that small businesses get. Twenty-one million small businesses receive $66 billion in a tax break to incentivize growth and job creation,” the congressman said.

“That is on the chopping block, and then you’ve got the very hostile and sinister death tax that would be the death of family farming and you also have an assault, all-out assault on fossil fuels. That's just mentioning a few, and again, this will make America less competitive, it will make it impossible for us to recover,” he said.

“By the way this is on top of the tax on every man which is the inflationary effects from the massive spending that we’ve seen to date, so again, the politics of this make it very difficult with the 3-seat margin in the House and only one seat to thread the needle in the Senate,” Arrington added.

Host Maria Bartiromo pointed out that President Joe Biden spoke with Chinese President Xi Jinping, but there was no mention in the read-out of the call about whether Biden spoke with the Chinese leader about the origins of COVID-19.

“Well, I have no confidence in our chief executive and our commander in chief. I suspect most Americans don't. In terms of presenting a strong front for our country, putting America first and not ceding to the likes of China,” Arrington said.

“By the way, we saw this unilateral surrender and retreat because of this botched withdrawal in Afghanistan, but all that we've talked about with this big tax is unilateral economic surrender to China and we’ve certainly done nothing to hold them accountable for the origins of COVID. We joined the World Health Organization without even a legitimate investigation of their being complicit with China,” the congressman said.

“So no, very little confidence that this president is going to do those things that need to be done to be strong and tough with China, and he's done nothing to enforce our trade agreement that Trump negotiated where they made the largest purchase of American products in the history of our 30-year relationship, so I think that thing is going to dissipate as well, and they’re going to probably reset to their stealing and cheating and taking advantage of the, you know, American economy and our generous trade relationship with them unfortunately,” he said.

Bartiromo pointed out that WHO President Tedros Adhanom Ghebreyesus is up for re-election. She asked whether Biden will replace him with someone that the American people can trust.

“Absolutely not, and if he was going to have any leverage to oust Tedros, he would not have re-joined the World Health organization. We’re paying $120 million to join this organization that, again, was complicit with China,” Arrington said.

“China is the real threat, and they pay half of the rate to be part of this World Health Organization,  which is -- has done nothing to serve America's interest for sure, and by the way, Secretary Austin need to tell us something that we don't know, and he needs to be held accountable along with other cabinet heads and generals,” he said.

“Everybody that was involved in the botched evacuation and withdrawal needs to be held accountable for either not giving the president the right advice or not standing up to the president and for -- for his incompetence in putting the lives of our troops at risk. That's going to be forthcoming for sure,” the congressman added.