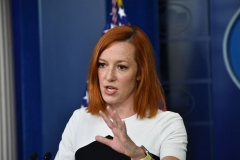 White House Press Secretary Jen Psaki holds a press briefing in the Brady Briefing Room of the White House in Washington, DC on May 5, 2021. (Photo by NICHOLAS KAMM/AFP via Getty Images)

(CNSNews.com) – The White House said Monday that it has repeatedly called for “an expert-driven evaluation” on the origins of the coronavirus “that is free from interference or politicization” and that in order to have an American-led investigation, it needs access to “underlying data and information.”

This after a Wall Street Journal report shows three researchers at the Wuhan Institute of Virology got sick with COVID-like symptoms in November 2019 before the pandemic began.

Fox News White House Correspondent Peter Doocy asked White House Press Secretary Jen Psaki why, in light of the report, President Joe Biden isn’t pushing for more access and information to get to the bottom of what happened.

DOOCY: On origins of COVID, there’s a new Wall Street Journal story that three researchers at the Wuhan Institute of Virology were hospitalized with symptoms consistent with both COVID-19 and seasonal illness in Nov 2019. That’s something that apparently known to U.S. intel officials, so why isn’t President Biden pushing for more access, more information to get to the bottom of exactly what happened?

PSAKI: We are, and we have repeatedly called for the WHO to support an expert-driven evaluation of the pandemic’s origins that is free from interference or politicization. Now there were Phase 1 results that came through. During that first phase of the investigation, there was not access to data. There was not information provided. Now we’re hopeful that WHO can move into a more transparent independent phase two investigation.

DOOCY: But with 589,920 dead Americans, at what point does President Biden say we don’t want to wait for the WHO? We don’t know what they’re doing. This needs to be an American-led effort to get to the bottom of what happened?

PSAKI: First of all, we need access to the underlying data and information in order to have that investigation.

DOOCY: But he talks all the time about he’s known President Xi for a long time, so why can’t he just call?

PSAKI: I think you’re misunderstanding how this process actually works. An international investigation led by the World Health Organization is something that we’ve actually been pressing for, for several months in coordination with a range of partners around the world. We need that data. We need that information from the Chinese government. What we can’t do – and what I would caution anyone doing is leaping ahead of an actual international process. We don’t have enough data and information to jump to a conclusion at this point and time.

DOOCY: Is there any amount of casualties from COVID in this country that would make you want to not wait for an international effort and just do it as—

PSAKI: I have to say, I think the family members of the loved ones whose lives have been lost deserve accurate information, data, not the jumping to a conclusion without having the information necessary to conclude what the origins are. What we do share, everyone in this country has the desire to know how this started, where it started and how to prevent it from ever happening again. That’s something we all share.

Another reporter asked Psaki to give a sense of the White House’s view of that report that the Wall Street Journal cited.

“Is it accurate, and do you have any concerns that it may have been politicized?” the reporter asked.

“I would say in terms of the report which was specifically about individuals being hospitalized, we have no means of confirming that or denying that. I mean it’s not a report from the United States. What I was conveying in response to Peter’s question is that it doesn’t mean we can draw a conclusion,” Psaki said.

“We don’t have enough information to draw a conclusion about the origins. There is a need to look into a range of options. We need data. We need an independent investigation, and that’s exactly what we’ve been calling for,” she said.

“I think the journal cited a U.S. intelligence report, so that would have been a U.S. report,” the reporter said.

“I don’t have anything more on a U.S. report from here,” the press secretary responded.