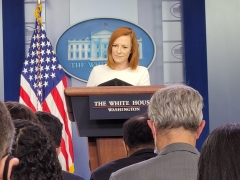 (CNSNews.com) - White House Press Secretary Jen Psaki was asked to explain Wednesday why the administration uses Title 42 to defend its immigration policies despite the fact that it was enacted by the Trump administration, which the Biden administration has criticized as “inhumane.”

Fox News White House Correspondent Peter Doocy asked, “And just because you keep using Title 42 to defend this administration’s immigration policies: That is a Trump-era regulation. You guys came in saying that the Trump-era immigration policy was very inhumane.”

PSAKI: Title 42 is not an immigration policy. It is a — it is a health authority, because we’re in the middle of a pandemic. The Trump administration approach to immigration was inhumane and was immoral. That’s why we need to put a new policy in place, and we need Congress to pass that policy.

DOOCY: Unified control — Democratic control of Congress. Many months in office. You have not even tried.

PSAKI: That’s not actually true. There’s been a —

PSAKI:  — just factual here: There’s been a bill proposed first day in office. Currently, it was proposed as a part of — steps were proposed as part of the reconciliation process. The parliamentarian rejected that proposal. They’re going back and proposing new options. The President supports that. He would like to see immigration reform pass into law more humane processes.

Doocy also questioned Psaki on whether President Joe Biden has ever been to the U.S.-Mexican border.

DOOCY: Just one more. Has President Biden ever been to the southern border?

PSAKI: In his life?

PSAKI: I will have to get — look back in my history books and check the times he’s been to the southern border. I’d be happy to.

DOOCY: We have been looking all morning and we cannot find any record of him visiting the border as president, vice president, senator, or even as a concerned citizen. Why would that be?

PSAKI: I can check and see when the last time or when he may have been, but tell me more about why you’re asking.

DOOCY: Because this is a president who makes a point when there are disasters in this country, like a wildfire or a hurricane, to go and see for himself firsthand what the needs are of the local community so that he can have an informed POV to make policy. Why doesn’t he do that — why doesn’t he go down to Del Rio, Texas, and see what’s going on?

PSAKI: Well, first of all, Peter, I think the situation at the border is the result of a broken system, and the president certainly relies on his experience.

So, whether it was the work he did to address root causes as vice president, his efforts when he was in the Senate to support comprehensive immigration reform — steps that at a time were done — being done and work toward in a bipartisan way — something that certainly we think should be the case today — he uses all of his experiences to inform how he governs, how he approaches challenges.

And certainly, he looks, again, at the last four years and the separation of children who were ripped from the arms of their parents as a way he does not want to proceed. So, all of his experiences and his time in office — whether vice president or Senate — inform his approach to issues.