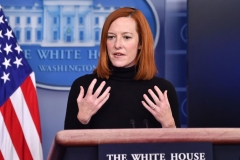 As CNSNews.com reported, the board decided “it was not appropriate for Facebook to impose the indeterminate and standardless penalty of indefinite suspension” on Trump’s account.

However, it gave Facebook six months to review the matter “to determine and justify a proportionate response that is consistent with the rules that are applied to other users of its platform.”

“Facebook decided to keep former President Trump off its platform for now. Senator Ted Cruz tweeted the following: ‘For every liberal celebrating Trump’s social media ban, if the Big Tech oligarchs can muzzle the former president, what’s to stop them from silencing you?’

Asked whether Cruz has a point, Psaki said, “Let me first say that this is an independent board’s decision, and we’re not going to have any comments on the future of the former president’s social media platform. That’s a decision that sounds like the independent board punted back to Facebook to make in the next six months as I know you’ve all reported.

“The president’s view is that the major platforms have a responsibility related to the health and safety of all Americans to stop amplifying untrustworthy content, disinformation and misinformation especially related to COVID-19, vaccinations and elections, and we’ve seen that over the past several months broadly speaking, I’m not placing blame on any individual or group,” she said.

“We’ve seen it from a number of sources. He also supports better privacy protections and a robust anti-trust program. So his view is that there’s more that needs to be done to ensure this type of misinformation, disinformation, damaging sometimes life-threatening information is not going out to the American public,” the press secretary added.

“More that needs to be done. Are there any concerns about 1st Amendment rights, and where does the White House draw the line on that?” Welker asked.

“I think we are of course a believer in 1st Amendment rights,” the press secretary said. “I think what the decisions are that the social media platforms need to make is how they address the disinformation, misinformation especially related to life-threatening issues like COVID-19 and vaccinations that continue to proliferate on their platforms.”