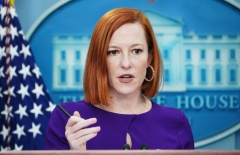 White House Press Secretary Jennifer Psaki speaks during the daily briefing in the Brady Briefing Room of the White House in Washington, DC, on January 18, 2022. (Photo by MANDEL NGAN/AFP via Getty Images)

(CNSNews.com) – White House Press Secretary Jen Psaki said Friday that during a news conference on Wednesday President Biden was saying that Russia doesn’t just use the military and tanks, which the U.S. is prepared for, but it uses cyberattacks, propaganda on social media, and even sends in “little green men,” which are “Russian military who aren’t in uniform.”

During an interview on ABC’s “The View,” the press secretary said the U.S. doesn’t know when Russia could try to invade Ukraine, and that it could happen “tomorrow.”

“Secretary of State Blinken met with Russian diplomats today in an effort to de-escalate tensions on the Ukraine-Russian border. Some think that the president actually gave Putin the green light to invade when he appeared to down play that potential minor incursion,” said “ABC News Live Primetime” and “World News Tonight” weekend anchor Lindsey Davis.

“The president quickly walked that back but Was the damage already done? Does he still believe Putin will invade Ukraine? And if so, what’s the plan, because diplomacy at this point doesn't seem to be working,” Davis asked.

“Well, you know, as you said Secretary Blinken is meeting with his Russian counterpart this morning and he'll be talking to the president tomorrow. He’s going to be talking to be talking to his national security team tomorrow. He gets every day updates, but here's what's important, and we learned a lot from 2014 from the tactics the Russians used in 2014 and since then when they invaded Ukraine,” Psaki said.

“What the president was getting at the other night is that they don't just use military and tanks, and we're very prepared for that to do that, and they may, and that could happen tomorrow. We don't know. We want to be very transparent with the public about what to expect, but we also know they use cyberattacks,” she said.

“We know they send what we call little green men in, which is basically Russian military who aren't in uniform and so we know they also use social media to push propaganda. We announced yesterday a bunch of sanctions for actions they've taken to date,” the press secretary said.

“We're working with all of our partners around the world and the president has been very clear with President Putin that if you invade, there will be severe consequences. Also, there are a range of tactics we’ll also prepared for, and We're going to be united in responding to those as well,” Psaki added.

Biden was asked Wednesday why the threat of new sanctions should give Russian President Vladimir Putin pause given how ineffective they’ve been in the past and whether the U.S. and the west lost nearly all of its leverage against Putin if the U.S. and NATO aren’t willing to put troops on the line to defend Ukraine from a Russian incursion.

“Well, because he’s never seen sanctions like the ones I promised will be imposed if he moves, number one. Number two, we’re in a situation where Vladimir Putin is about to — we’ve had very frank discussions, Vladimir Putin and I, and the idea that NATO is not going to be united, I don’t buy. I’ve spoken to every major NATO leader. We’ve had the NATO-Russian summit. We’ve had other — the OSCE has met, et cetera,” Biden said.

“And so, I think what you’re going to see is that Russia will be held accountable if it invades, and it depends on what it does. It’s one thing if it’s a minor incursion and then we end up having a fight about what to do and not do, et cetera., but if they actually do what they’re capable of doing with the forces amassed on the border, it is going to be a disaster for Russia if they further ingra- — invade Ukraine, and that our allies and partners are ready to impose severe costs and significant harm on Russia and the Russian economy,” he said.