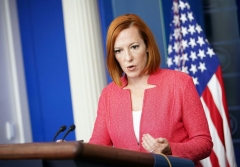 White House Press Secretary Jen Psaki speaks during the daily briefing in the Brady Briefing Room of the White House in Washington, DC on November 29, 2021. (Photo by MANDEL NGAN/AFP via Getty Images)

(CNSNews.com) - President Joe Biden ordered a ban on travel from South African countries on Friday because of the new Omicron COVID-19 variant, which has prompted cries of hypocrisy over his criticism of former President Donald Trump for imposing a travel ban on China.

In January 2020, Trump announced a travel ban on China after a few confirmed cases of COVID in the United States.

In February 2020, then-former Vice President Biden tweeted, “We are in the midst of a crisis with the coronavirus. We need to lead the way with science — not Donald Trump’s record of hysteria, xenophobia, and fear-mongering. He is the worst possible person to lead our country through a global health emergency.”

Fox News White House Correspondent Peter Doocy asked, “Before Joe Biden was president, he said that COVID travel restrictions on foreign countries were ‘hysterical xenophobia’ and ‘fearmongering.’ So what changed?”

“Well, I would say, first — to put it in full context, Peter — what the president was critical of was the way that the former president put out, I believe, a xenophobic tweet; and how he called — what he called the coronavirus; and who he directed it at,” Psaki said.

“The president has not been critical of travel restrictions. We have put those in place ourselves. We put them in place ourselves in the spring, but no, he does not believe — he believes we should follow the advice of health and medical experts. That’s exactly what he did in putting in place these restrictions over the weekend,” she said.