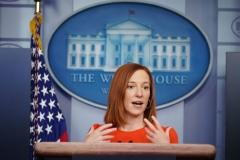 White House Press Secretary Jen Psaki speaks during the daily briefing in the Brady Briefing Room of the White House in Washington, DC on January 21, 2021. (Photo by MANDEL NGAN/AFP via Getty Images)

(CNSNews.com) - White House Press Secretary Jen Psaki clarified Thursday that the people who are going door-to-door to encourage people to get vaccinated are not federal government employees, but are community volunteers and clergy members.

She also stressed that the federal government does not have a database showing who has been vaccinated and who has not, and it has no plans to do so in the future.

As CNSNews.com previously reported, President Joe Biden said on Tuesday, “Now we need to go community by community, neighborhood by neighborhood, and oftimes door-to-door literally knocking on doors to get help to the remaining people protected from the virus.”

A reporter pointed out Thursday that the president’s mention of going door-to-door sparked criticism, especially from Missouri Gov. Mike Parson, who said he doesn't want government employees going door-to-door in his state encouraging people to get vaccinated.

“I have directed our health department to let the federal government know that sending government employees or agents door-to-door to compel vaccination would NOT be an effective OR a welcome strategy in Missouri!" Parson tweeted.

When asked Thursday to explain who is knocking on people’s doors encouraging them to get vaccinated and where, Psaki said, “Sure, let me first say that this has been ongoing since April, and the best people to talk about vaccinations are local trusted messengers, doctors, faith leaders, community leaders.”

“Those are the people who are the trusted messengers around the country, and we believe that we need to empower these individuals to continue to work in communities to make sure people know that these vaccines are safe, that they can save lives, and so these are grassroots voices across the country,” the press secretary said.

“They are not members of the government. They are not federal government employees. They are volunteers. They are clergy. They are trusted voices in communities who are playing this role in door-knocking, and this is one of the tactics that we’ve used over the last couple of months, but we’ve seen - so it’s not the only factor - but I would say that we’ve seen in some states - Alabama, the adult vaccination rate increased by 3.9 percent, 149,000 additional  adults got their first dose,” she said.

“Is it working, and who are these volunteers reaching other than say shut-ins, because people don’t even have to get off their couches to see who’s at their door these days?” the reporter asked.

“That’s fair, depending on the technology in your house, I guess, I suppose, but I think what’s important for people to know …. is that the federal government does not have a database of who’s been vaccinated. That is not our role. We don’t maintain a database along those lines, and we have plans to,” Psaki said.

“We do know where there are rates of vaccination across the country, and we know, as I just elicited in some of the data, that there are tactics that are powerful and impactful, and so I will say the thing that is a bit frustrating to us is that when people are critical of these tactics, it’s really a disservice to the country and to the doctors, faith leaders, community leaders, and others who are working to get people vaccinated. This is about saving lives and ending this pandemic,” the press secretary added.