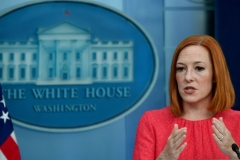 White House Press Secretary Jen Psaki speaks during a daily briefing in the James S Brady Press Briefing Room of the White House in Washington, DC, on May 2, 2022. (Photo by NICHOLAS KAMM/AFP via Getty Images)

(CNSNews.com) - White House Press Secretary Jen Psaki on Monday credited the Trump administration with the Biden administration’s decision to create a Disinformation Governance Board within the Department of Homeland Security, calling it a “continuation of the work that was done under the prior administration.”

Fox News White House Correspondent Peter Doocy asked, “Does the president know that DHS is putting together this Disinformation Governance Board?”

PSAKI:  Well, Peter, I think I would note — and I’m not sure if this has been in your reporting yet — but this is a continuation of work that was done under the prior administration — under the Trump administration — to take steps to address disinformation, address the use of disinformation in helping smugglers prompt the movement of more migrants across — to the border.

I would note that the first example given in the announcement about this was: DHS has worked to understand how, quote, “misinformation is spread by human smugglers that prey on vulnerable populations attempting to migrate to the United States.”

So, for anyone who’s out there who may be concerned about the increase in migrants to the border: This is the kind of apparatus that’s working to address disinformation and, again, continuing the work of the Department of Homeland Security in 2020, something we’re currently applauding.

DOOCY: But just in terms of what the president wants out of this, does he want the people on this board to start censoring information that is not helpful to him?

PSAKI:  Well, let me be clear on exactly what this board does or what the work they’re doing does, and in their announcement, which is publicly available on the Department of Homeland Security website for anyone to read, it says, quote, “The primary mission is to establish best practices to ensure that efforts to understand and respond to disinformation are done in ways that protect privacy, civil rights, and civil liberties, and the right to free speech.”

PSAKI:  I think I noted exactly what the objective of the board is, including continuing the work of the prior administration, and the woman you noted has extensive experience and has done extensive work addressing disinformation. She has testified before Congress, testified in Europe. She has done — worked closely with the Ukrainians and has unique expertise, especially at this moment we’re facing.