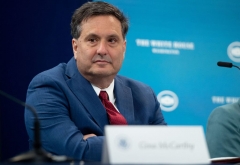 (CNSNews.com) - White House Chief of Staff Ron Klain is under fire for retweeting a message from former Chairman of Economic Advisors Jason Furman which said that inflation and supply chain issues are “high class problems.”

“Most of the economic problems we're facing (inflation, supply chains, etc.) are high class problems. We wouldn't have had them if the unemployment rate was still 10 percent. We would instead have had a much worse problem,” Furman tweeted.

White House Press Secretary Jen Psaki defended the tweet, saying that gas prices are so high because the unemployment rate is down and people are buying more goods and traveling.

PSAKI: Do you think two tweets means more? I’m just curious. So just for context, what Ron Klain retweeted was a tweet from the former Chairman of Economic Advisors Jason Furman where he said for full context, which I think is important, ‘Most of the economic problems we’re facing (inflation, supply chains, etc.) are high class problems.’ What he went on to say is, ‘We wouldn't have had them if the unemployment rate was still 10 percent. We would instead have had a much worse problem.’

So I think the point here is while there are some critics who are saying--- what some of these critics are saying is I don’t -- we don’t know if they’re saying that what they thought was great was when the employment rate was double what it is today or when people were locked in their homes, and therefore, gas prices were lower. We’re at this point because the unemployment rate has come down and been cut in half, because gas--- because people are buying more goods, because people are traveling, and because demand is up, and because the economy is turning back on.

So Jason Furman of course is more than capable of speaking or tweeting for himself obviously and providing additional context, but what the point is here is that we are at this point because we’ve made progress in the economy, and what would be worse in our view is if the unemployment rate was at 10 percent and people were out of work, hundreds of thousands of people were still dying of COVID, and people were able to lose their homes. So that’s the full context.

HEINRICH: That’s a much more eloquent way of putting it than the high class comment in that tweet. It’s not the first time that Ron Klain’s Twitter has drawn some sharp criticism. Is that something that the White House is addressing at all given this pushback?

PSAKI: Are we addressing the chief of staff’s Twitter habits?

PSAKI: It is not a top priority I would tell you at this time. The chief of staff is out there speaking on his own accord to members of Congress, to the media frequently as any chief of staff does, and I think it’s important also for anyone here to be able to tout points that they find interesting, and that’s the purpose of public speech.