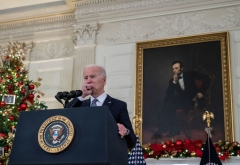 President Joe Biden speaks about the November Jobs Report from the State Dining Room of the White House in Washington, DC, on December 3, 2021. (Photo by ANDREW CABALLERO-REYNOLDS/AFP via Getty Images)

(CNSNews.com) - The White House said Friday that President Biden is following policy by working even though he has cold symptoms, because he has tested negative for COVID-19.

As CNSNews.com reported, Biden acknowledged that he has a cold after delivering a speech earlier on the latest unemployment claims. He told reporters at the end of his speech that he gets tested daily for COVID, which appears to be a misstatement by the president, because according to his doctor, Dr. Kevin O’Connor, he gets tested three times a week.

“In the president’s remarks earlier today when he was asked about his cold, he said that he is being tested daily for COVID-19. My understanding was that it was done with less frequency of that. I know Dr. O’Connor said that he was tested three times this week, but is there a change in protocol where he is going to be tested daily? And what kind of test is he getting - antigen or PCR test?” a reporter asked White House Press Secretary Jen Psaki on Friday.

“I think we just put out some details from Dr. O'Connor that outlines how many times he's been tested, and I believe the kind of tests that he received. He received those tests because he had a cold, which would be considered a symptom, but it’s not a change in protocol,” Psaki said.

“So he will not be tested daily?” the reporter asked.

CBS News Senior White House Correspondent Weijia Jiang asked, “Just to clarify, the president did say he was tested everyday for COVID, so did he just misspeak there?”

“I think I would point you to the transparent note we put out from the doctor to all of you that outlines how many times he was tested and exactly what he was tested for,” Psaki said.

Fox News White House Correspondent Peter Doocy asked, “One more thing to follow up on from earlier. The president was hoarse and coughing today. A lot of people in the workforce are encouraged not to go to work if they are exhibiting those symptoms even if they are fully vaccinated, so are the rules different for the president?”

“The president again, was tested, as we put out in a transparent piece of information from his doctor where he received a response quickly from that test, enabling him to proceed. People also said he had a cold, which is what you know from the information put out by the doctor,” Psaki said.

“But as you know from your own experience, it is possible to test negative several times before there’s a positive test, so is there any concern about having him at work, while he’s got these symptoms, even if he is showing negative?” Doocy asked.

“I can assure you that the president follows every protocol. He wants to keep everyone safe in the white house, and that’s why, obviously we consult with the doctor, and we put out that information to make it available to all of you,” Psaki said.

“This can be heard in his voice and he is feeling the colloquially well-known ‘frog in ones throat,’” O’Connor wrote.

According to the doctor, Biden was tested for COVID-19 and the flu, among other “common respiratory pathogens” and tested negative.

“Treatment will include common over the counter medications for symptoms,” O’Connor said.