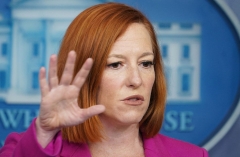 White House Press Secretary Jen Psaki speaks during the daily press briefing on October 22, 2021, in the Brady Briefing Room of the White House in Washington, DC. (Photo by MANDEL NGAN/AFP via Getty Images)

(CNSNews.com) - White House Press Secretary Jen Psaki said Friday that President Joe Biden “did drive through the border” while on the campaign trail in 2008.

As CNSNews.com reported, when asked Thursday whether he has plan to visit the southern border, Biden told a CNN town hall, “I've been there before, and I haven't -- I mean, I know it well. I guess I should go down.”

Fox News White House Correspondent Peter Doocy asked Psaki, “Following up on something else the president said last night. Why did President Biden say he has been to the border?”

PSAKI: Well Peter, as you may have seen, there’s been reporting that he did drive through the border when he was on the campaign trail in 2008, and he is certainly familiar with the fact - and it stuck with him - with the fact that in El Paso, the border goes right through the center of town, but what the most important thing everyone should know and understand is that the president has worked on these issues throughout his entire career and is well-versed in every aspect of our immigration system, including the border.

That includes when he was vice president, and he went to Mexico and Central America 10 times to address border issues and talk about what we can do to reduce the number of migrants who are coming to the border. He worked in a bipartisan manner with senators like Ted Kennedy, Harry Reid, John McCain and others to push for comprehensive immigration reform. He does not need a visit to the border to know what a mess was left by the last administration. That’s his view.

PSAKI: What is the root cause? Where are people coming from who are coming to the border, Peter?

DOOCY: The president said that he --

PSAKI: I’m asking you a question, because I think people should understand the context. Where do people-- where to people come--

PSAKI: Okay, I’ll answer it for you. People come from Central America and Mexico to go to the border. The president has been to those countries 10 times to talk about border issues. There is a focus right now on a photo-op. The president does not believe a photo-op is the same as solutions. That may be a difference he has with Republicans.

DOOCY: But that’s not what he said either. He said, I guess I should go down. So does he think that he needs a photo-op? Is that what he’s saying?

PSAKI: He doesn’t, and that’s a fundamental disagreement he has. I would say the former president went to the border at least once, maybe more. You may know the numbers. How did that immigration policy result, Peter? That immigration policy resulted in separating kids from their parents, building a border wall that’s feckless and that costs billions of dollars for taxpayers. The president fundamentally disagrees on how we need to approach the immigration issue.

DOOCY: Has anything changed at the border between 2008 when he drove by and 2021?

PSAKI: Aside from the fact that migrants are still coming to the border through the course of Democratic and Republican presidents and the need to reform the immigration system is even farther along overdue? No, but we need to work with Democrats and Republicans to get that done.