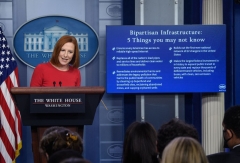 White House Press Secretary Jen Psaki speaks during the daily press briefing on October 19, 2021, in the Brady Briefing Room of the White House in Washington, DC. (Photo by NICHOLAS KAMM/AFP via Getty Images)

(CNSNews.com) – White House Press Secretary Jen Psaki said Tuesday that the Democrats’ proposal to have the IRS monitor the bank accounts of Americans with inflows and outflows of $10,000 annually is for people who don’t get W-2s.

“To follow up on some of the tax talk, there’s this new proposal by Democrats in Congress and the Treasury secretary to start monitoring every bank account that has $10,000 of cash flow per year. So, is the plan to catch billionaire tax cheats by snooping on accounts that just have $10,000 in them?” Fox News White House Correspondent Peter Doocy asked.

PSAKI: Well, that’s not exactly an accurate description, so let me help you with an accurate description of what is actually happening here, and there was a statement by the Secretary of Treasury on exactly this, where she said in this statement — just to reiterate — that she deeply appreciates “the work of Chairman Wyden and Chairman Neal’s leadership on reconciliation and, in particular, the need to close the tax gap.”

At the core of a discrepancy in the ways types of income are reported to the IRS are opaque income sources frequently which avoid — frequently avoid scrutiny, while wages and federal benefits are typically subject to full compliance. So people who get W-2s — whether they are teachers, firefighters, employees at Fox News, anywhere where they may be getting a W-2 — that’s not what we’re talking about here; they’re already reporting their income.
We’re talking about high-net-worth individuals who are not paying the taxes they owe, and that’s what this policy would propose to address.

DOOCY: But in the statement that you just cited, it says, “Many top earners avoid paying billions in the taxes that they owe by exploiting the system.” So, what — why is it that you need to start looking at accounts that just have $10,000 in it?  Maybe somebody doesn’t get a W-2.

PSAKI: That is — that is not exactly what it does. The $10,000 is the — anything under that would not be applicable, nor would people who received W-2s, Peter.  What we’re talking about here are people who are high-net-worth individuals who are not paying the taxes they owe — something we think everybody believes should happen and can help pay for in a range of important investments to make us more competitive.

According to the revised Treasury plan:

Financial institutions and banks will add just two additional numbers to the information that they already supply to taxpayers and the IRS: the total amount of funds deposited into the account and the total amount withdrawn over the course of a year. The scope of this information sharing is extremely limited.  Banks will not share with the IRS any information to track individual transactions under this proposal, and the IRS will have no ability to track individual transactions...

Imagine a taxpayer who reports $10,000 of income; but has $10 million of flows in and out of their bank account. Having this summary information will help flag for the IRS when high-income people under-report their income (and under-pay their tax obligations). This will help the IRS target its enforcement activities on those who are actually evading their tax obligations—decreasing costly and burdensome audits for the vast majority of taxpayers who pay what they owe.

Under the current proposal, financial accounts with money flowing in and out that totals less than $10,000 annually are not subject to any additional reporting. Further, when computing this threshold, the new, tailored proposal carves out wage and salary earners and federal program beneficiaries, such that only those accruing other forms of income in opaque ways are a part of the reporting regime.