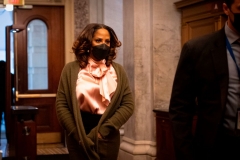 Impeachment manager Del. Stacey Plaskett, D-V.I., walks through the first floor of the Senate during a break in the Senate impeachment trial of former US President Donald Trump on Capitol Hill February 12, 2021, in Washington, DC. (Photo by CAROLINE BREHMAN/POOL/AFP via Getty Images)

When asked why the House impeachment managers backed down on the subpoenaing of Rep. Jamie Herrera Beutler (R-Wash.), Plaskett said, “I think we didn't back down. I think what we did was, we got what we wanted, which was her statement, which was what she said, and had it put on the record, and being able to say it on the record out loud, so that others would hear.

“Just so the American public is aware, witnesses in a Senate hearing do not come and stand before the senators and make any statements. It's a deposition. It's videotaped, and that is brought before the Senate. So, I know that people are feeling a lot of angst and believe that maybe, if we had this, the senators would have done what we wanted, but, listen, we didn't need more witnesses. We needed more senators with spines,” she said.

Democrats wanted to subpoena Rep. Jamie Herrera Beutler (R-Wash.) but opted to have her statement read into the record instead by lead House impeachment manager Jamie Raskin (D-Md.). The statement said that House Minority Leader Kevin McCarthy (R-Calif.) asked Trump to call off the rioters but Trump said the rioters weren’t his people. They were Antifa.

According to the congresswoman, McCarthy responded saying, "No, they're your people. You need to call them off." Herrera Beutler said Trump’s response was “chilling,” because he said, “Well, Kevin, I guess they're more upset about the election theft than you are."

When asked why they backed down on the subpoena, Plaskett said, “I think we didn't back down. I think what we did was, we got what we wanted, which was her statement, which was what she said, and had it put on the record, and being able to say it on the record out loud, so that others would hear.”

“I think that all Americans, when we rested our case, believed that we had proved our case, and the nonsense that the defense put out did not dispute that. As you heard from Mitch McConnell, his closing statement was what we said. He agreed with us. They all agreed. They just decided that they wanted to give him a walk, and they found a technicality that they created to do so,” she said.

Plaskett said the impeachment managers “had sufficient evidence to prove that the president did what we said he did, which was incite an insurrection to overthrow our government, to retain power for himself, and there was overwhelming evidence of that.”

The delegate from the U.S. Virgin Islands said it was “heartbreaking” and “frustrating” that the Republicans voted to acquit Trump, “but the founders knew what they were doing, and so we live with the system that we have, but, thankfully, it was bipartisan, the greatest majority voting to convict a president, as well as the American people seeing truly who Donald Trump was.”