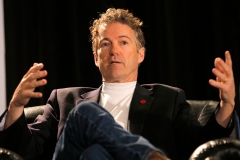 “In Wisconsin, tens of thousands of absentee votes had only the name on them and no address. Historically, those were thrown out. This time they weren't. They made special accommodations because they said, oh, it’s a pandemic and people forgot what their address was, so they changed the law after the fact,” Paul said.

“That is wrong, that's unconstitutional, and I plan on spending the next two years going around state to state and fixing these problems, and I won’t be cowed by liberals in the media who say, there's no evidence here, and you're a liar if you talk about election fraud. No, let's have an open debate. It’s a free country,” the senator said.

Stephanopolous asked Paul whether he accepts that the election was not stolen.

“Well, what I would say is that the debate over whether or not there was fraud should occur. We never had any presentation in court where we actually looked at the evidence. Most of the cases were thrown out for lack of standing, which is a procedural way of not actually hearing the question,” Paul said.

“There were several states in which the law was changed by the secretary of state and not the state legislature. To me, those are clearly unconstitutional, and I think there’s still a chance that those actually do finally work their way up to the Supreme Court. Courts traditionally and historically don’t like to hear election questions, but yes. Were there people who voted twice?” he said.

“Were there dead people who voted? Were there illegal aliens who voted? Yes, and we should get to the bottom of it. I’ll give you an example. In my state, when we had a Democrat secretary of state. She refused, even under federal order, to purge the roles of illegal voters. We got a Republican secretary of state, and he purged the rules,” the senator said.

Stephanopolous pointed out that the DOJ led by former Attorney General Bill Barr said there’s no widespread evidence of fraud. “Can’t you just say the words, this election was not stolen?

STEPHANOPOULOS: Well, 75 percent of Republicans agree with you because they were fed a big lie by President Trump and his supporters to say the election was stolen. Why can't you say President Biden won a legitimate, fair election?

PAUL: Hey, George. George. George, where you make a mistake is that people coming from the liberal side like you, you immediately say everything's a lie instead of saying there are two sides to everything.

Historically what would happen is if I said that I thought that there was fraud, you would interview someone else who said there wasn’t, but now you insert yourself in the middle and say that the absolute fact is that everything that I’m saying is a lie.

STEPHANOPOULOS: -- Senator, I said what the president said was a lie because -- he said the election was stolen. This election was not stolen. The results were certified in every single state after counts and recounts.

PAUL: You’re saying that absolutely it was -- you’re saying there was no fraud, and it’s all been investigated, and that’s just not true.

STEPHANOPOULOS: That’s not what I said, sir. I said the Department of Justice found no evidence --

STEPHANOPOULOS: You said something that was not true.

STEPHANOPOULOS: I said it was a lie that the election was stolen.

Stephanopolous repeated that there was “no widespread evidence of election fraud that overturned” the election results.

“That was stated as well by the Department of Justice led by President Trump's attorney general,” he said.

PAUL: Barr said that, but there was -- yes, he said that, yes. That was a pronouncement. There's been no examination, thorough examination of all the states to see what problems we had and see if they could fix them.

Now, let me say to be clear, I voted to certify the state electors because I think it would be wrong for Congress to overturn that, but at the same time, I’m not willing just to sit here and say, oh, everybody on the Republican side is a liar and there is no fraud. No, there were lots of problems and there were secretaries of state who illegally changed the law and that needs to be fixed, and I’m going to work hard to fix it, and I won’t be cowed by people saying, oh, you’re a liar.

That’s the problem with the media today is they say all Republicans are liars, and everything we say is a lie. There are two sides to every story. Interview somebody on the other side, but don’t insert yourself into the story to say we’re all liars, because we do think there’s some fraud and the election needs to be fixed.

PAUL: Sure there are. There are two sides to every story. George, you're forgetting who you are. You’re forgetting who you are as a journalist if you think there's only one side. You're inserting yourself into the story to say I’m a liar because I want to look at election fraud and I want to look at secretaries of state who illegally changed the voter laws without the permission of their state legislatures. That is incontrovertible, it happened.

And you can't just sweep it under the rug and say, oh, nothing to see here, and everybody is a liar and you're a fool if you bring this up. You’re inserting yourself into the story. A journalist would hear both sides and there are two sides of a story.

STEPHANOPOULOS: I’m standing -- I’m standing by facts. There are not two sides to facts. I did not say this was a perfect election. I say the results were certified. I said it was not stolen. It is a lie --

STEPHANOPOULOS: That's not what I said.

PAUL: Should we investigate the fact that tens of thousands of absentee ballots did not have addresses on them and normally were disqualified, but this time, they were counted? Should we examine that?

I don’t know whether it affected the election or not, but I have an open mind, and if we had actually examined this and we find out it didn’t, that’s fine, but it still should be fixed.

STEPHANOPOULOS: There can be more investigations. The investigations that have taken place have shown there’s not enough fraud to change the results of this election. That has been certified by every state. It was stated by the Justice Department and the attorney general.

PAUL: And I accepted the states' certifications, but it doesn't mean that I think there wasn’t fraud and that there weren’t problems that have to be investigated. And it doesn’t mean that the law wasn’t broken.

I believe in Pennsylvania, they broke the law, and I believe if that ever will get a real hearing in the Supreme Court, it was denied for standing. It wasn’t actually taken up. If it were taken up, I do believe that the Supreme Court would overrule and say that they did break the law illegally.

STEPHANOPOULOS: I asked you a very simple question, was the election stolen or not?

PAUL: I think there was a great deal of evidence of fraud and changing of the election laws illegally. And I think a thorough investigation is warranted.