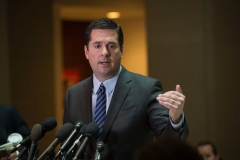 “We are not here to run a show trial in an effort to impeach the president of the United States. It’s clear that since the Democrats took control of the House of Representatives they have always intended to transform the Intelligence Committee into the Impeachment Committee,” Nunes said in a speech on the House floor.


“Every one of their actions - from the staff they hire to the Trump conspiracy theories they investigate, their willful neglect of our basic oversight duties demonstrates that this has been their plan from day one,” he said.

“Now this is further confirmed by the adoption of these rules, which simply gives the House approval for the Intelligence Committee Democrats to continue pursuing their bizarre obsession with overturning the results of the last presidential election,” the congressman said.

“Nevertheless, after spending three years trying to manufacture a crime they can attribute to President Trump, they’ve come up empty. First, they insisted the president is a Russian agent. Then they claimed he’s a money launderer and a tax cheat and fraudulent businessman. Now they have decided they don’t like the way he talks to foreign leaders, but they have no evidence and no argument to support impeachment,” he said.

“All they have is the unconditional cooperation of the media to advance their preposterous narrative,” Nunes said. “If they had a real case, they wouldn’t be wasting time spoon-feeding ridiculous attacks that include defamation and slander on both current and former Republican staff of the Intelligence Committee.

“What we are seeing among Democrats on the Intelligence Committee down in the SCIF right now is like a cult. These are a group of people loyally following their leader as he bounces from one outlandish conspiracy theory to another, and the media are the cult followers permanently stationed outside the committee spaces pretending to take everything seriously because they too support the goal of removing the president from office,” he said.

“After today, the House Intelligence Committee ceases to exist. Oversight is not being done, and now we have a full-fledged Impeachment Committee in the basement of the Capitol. Think about that, America,” the congressman concluded.