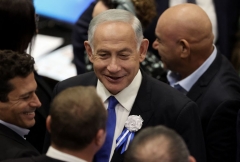 Incoming Israeli Prime Minister Benjamin Netanyahu (C) arrives for the swearing in ceremony of the new Israeli government at the Knesset (Israeli parliament) in Jerusalem, on November 15, 2022.(Photo by ABIR SULTAN/POOL/AFP via Getty Images)

(CNSNews.com) - When asked whether he’d like to see former President Donald Trump re-elected, incoming Israeli Prime Minister Benjamin Netanyahu told NBC’s “Meet the Press” on Sunday that he’ll “deal with anyone who’s elected president” - those he’s worked with in the past and anyone new.

“Well, let me say that I'll deal with anyone who's elected president, those that I worked with in the past and anyone new who comes to the plate because the bond between Israel and America, and this was not a shibboleth, this was not just a saying,” Netanyahu said.

“It really is a bond of peoples, and it's a civilizational bond, and it's strong. I'll deal with anyone, and I certainly will not step on that land mine that you just put before me, Chuck. Come on, I've been in this business long enough and so have you. Keep trying,” he said.

The interview began with host Chuck Todd asking the Israeli leader about the rise in anti-Semitism around the globe and in the United States, which Netanyahu called anti-Semitism “the oldest disease.”

It's been around as a systemic ideology for 2,500 years, 500 years before the rise of Christianity actually. So it's accompanied our history with horrific results over the centuries, and it's not going to go away.

That's clearly unacceptable, but it's not merely morally unacceptable, it's just dangerous to categorically deny the rights and existence of an entire human group. I think that is a danger, not merely for Jews, but for all free societies, and I think there should be a consistent and unabashed condemnation of that and opposition to it from Jews and everyone else.

On former President Donald Trump, Netanyahu said that “Trump did great things for Israel,” pointing to Trump’s decision to recognize Jerusalem as Israel’s capital and moving the U.S. embassy there and recognizing Israel’s sovereignty in the Golan Heights.

Netanyahu said that the rise in anti-Semitism was “one of the unfortunate effects of the internet age.”

TODD: Look, you've got a unique relationship with former President Trump. He has consistently flirted with some really fringe characters that spout this antisemitic behavior, that preach white supremacy and white nationalism, things like that, and he doesn't denounce it. He has yet to denounce Kanye West at all. He's yet to denounce being with a white supremacist a few days ago. Why does he have this difficulty, do you think?

NETANYAHU: I don't know. First, let me say that President Trump did great things for Israel. He recognized Jerusalem as our capital, long overdue since King David proclaimed it as such 3,000 years ago. He moved the American embassy there. He recognized our sovereignty in the Golan Heights.

He got out of what I believe is the disastrous Iran deal that would've paved Iran's path with gold, hundreds of billions of dollars of sanctions relief towards a nuclear arsenal. So he's done all these great things, and I appreciate it, and I remain appreciative. On this matter, on Kanye West and that other unacceptable guest, I think it's not merely unacceptable, it's just wrong, and I hope he sees his way to staying out of it and condemning it.

TODD: You do seem though to-- you want to praise him for what he did for you. It's an ends justifies the means argument, and at what point does his behavior end up impact -- I mean, if his behavior is creating death threats to Jews, inspiring people, like what happened at the Tree of Life Synagogue in Pittsburgh, to shoot and kill Jews, doesn't that wipe away anything good he did for Israel?

NETANYAHU: If it's systemic and continues, and I doubt that it will, because I think he probably understands that it crosses a line, but if you ask me what is driving the rise of antisemitism in France or in Britain and elsewhere, where it's clearly not this or that personality, then I would say that probably what is driving it is one of the unfortunate effects of the internet age.

It was wrong then, it's wrong now, but it's got an extra life probably in the United States and in other countries by the age of the internet, and I think that's the deeper phenomena that is happening here.

TODD: I understand. Are you at all concerned though that if you, if your government gets what you want you overlook, whether it's Vladimir Putin, who's also an antisemite, or Donald Trump? I mean, what is the line for you?

NETANYAHU: I don't overlook antisemitism. I have a clear position against it, which I voice and I expect others to voice as well, as I've just said on this program, but I think if you ask about the – you're asking a deeper problem which I, which I deal with in my book – I’ll plug it relentlessly during this program if you don't – but I mean it because it's real.

The president of the United States, who's an old friend of mine, Joe Biden, for 40 years, he meets sometimes with leaders of democracies and often with leaders of dictatorships which he finds unsavory because he's balancing America's interests. Everybody does that, but for me, the dividing line is very clear.

When it comes to questions of our existence, safeguarding our existence, then existence comes first. I don't think that's the case here, and I don't maintain that it is here, but you can draw the line morally without getting into that bind, but I'll mention the fact that Churchill, whom I admire greatly, made a pact with Stalin. You know who Stalin was.

You know how many millions he murdered, but he said, "Well, to deal with the larger danger of Hitlerism," he made a pact with Stalin. That's where I would draw the line. I hope we never get to it. We haven't so far, and I don't intend to.

TODD: So it sounds like – it sounds like you're explaining a question I had for you, and you kind of explained it there. You've been more critical of some Congressional Democrats who are critical of the Israeli government than you are of a Donald Trump who's been elevating people who praise Hitler. Does that go to this sort of transactional nature if it's, you know, "But they're helping Israel, and if they're helping Israel, that's what got to come first?"

NETANYAHU: Sorry, Chuck, I just nullified that argument on this very program and on previous programs when I came out very strongly against that meeting with that, with those antisemitic rantings, which in the case of at least one of the participants seemed to be something that is, how shall I say this, related to personalities more than, probably more than views. but they're bad enough either way.