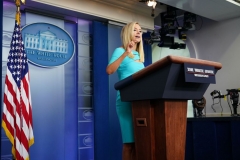 White House Press Secretary Kayleigh McEnany speaks during a briefing in the Brady Briefing Room of the White House in Washington, DC on September 16, 2020. (Photo by MANDEL NGAN/AFP via Getty Images)

(CNSNews.com) – White House Press Secretary Kayleigh McEnany decried the recent attacks on police officers as a result of the defund the police movement - which she called “a poisonous ideology” - and warned that attacking law enforcement is “an assault” against the community, “an assault against law and order,” and “antithetical to what we value as Americans.”

“Targeting a police officer is an assault against your community. It is an assault against law and order. It's antithetical to what we value as Americans. We all remember the disastrous impact of the Ferguson effect. We do not want to see a repeat today. Defund the police is not just dangerous policy, it is a poisonous ideology. We must respect our police, not revolt against them,” she said.

McEnany pointed to the shooting ambush of two sheriff’s deputies in Los Angeles over the weekend as just one example of that.

Fourteen months ago, two deputies with the Los Angeles Police Department were sworn in to protect and serve their communities. This past Saturday, these two deputies were ambushed. While sitting in their patrol car in Compton, California, a suspect approached the passenger side window, took aim, and fired multiple shots at point-blank range into the patrol car. ‘I have been shot, send help,’ begged one of the deputies over 911. This was a cowardly, brazen, and unprovoked attack against law enforcement.

One of the deputies attacked was a 31-year-old mother of a six-year-old boy. She was seen on security footage attending to the wounds of her partner, despite being shot in the jaw and arm herself. She is a true hero. Rushed to the hospital, these two deputies were targeted yet again.

“The L.A. County sheriff's tweeted this: “To the protesters blocking the entrance and exit of the hospital emergency room, yelling ‘We hope they die,’ referring to two L.A. Sheriff's ambushed today in Compton,” they said this, “do not block emergency and exits to the hospitals. People's lives are at stake."

McEnany called it “truly despicable behavior from the protesters.”

“People's lives are indeed at stake, and it is truly a ‘double miracle,’ as the Los Angeles Sheriff Alex Villanueva described it, that these deputies are alive today,” the press secretary said.

In the past 24 hours alone, we've seen law enforcement targeted across the country -- this is in 24 hours: In Phoenix -- in Phoenix, a U.S. Marshal was ambushed and shot outside a federal courthouse in a drive-by shooting.  In Lynwood, California, a suspect approached a patrol car and fired a handgun into the passenger-side window.  In Suffolk, Virginia, a suspect opened fire on a marked police car, hitting the vehicle three times.  This is within 24 hours.

These acts are despicable.  Rhetoric such as “defund the police” is likely to have negative consequences for law enforcement across the country, threatening the safety of our communities.

As Los Angeles Sheriff Villanueva warned, the ambush in Compton is a, quote, “sober reminder.  It's a dangerous job.”  “Actions, words have consequences,” he said.  “Our job does not get any easier because people do not like law enforcement.  It pisses me off,” he said.  “It dismays me at the same time.  There's no pretty way to say it.”

The president wants law and order, which is the best way to maintain peace in our streets, and he wants the police to be respected and protected.