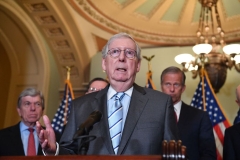 (CNSNews.com) - Senate Minority Leader Mitch McConnell (R-Ky.) called on House Democrats on Wednesday to pass legislation that would grant the highest court in the nation the same security measures given to those in the legislative and executive branches after news broke that a man who threatened Supreme Court Justice Brett Kavanaugh was arrested near the justice’s home.

The Supreme Court Police Parity Act of 2022” (S.4160) would grant security measures to “any member of the immediate family of the Chief Justice, any Associate Justice, or any officer of the Supreme Court if the Marshal determines such protection is necessary.”

McConnell said that House Democrats “have spent weeks blocking” the measure, and he called on Democrats to “pass it before the sun sets today.”

According to The Washington Post, the man was arrested by Montgomery County Police Wednesday morning armed with “a Glock 17 with two magazines and ammunition, pepper spray, a tactical knife, a hammer, a screwdriver, a crow bar, zip ties and duct tape, along with other gear.”

In a speech on the Senate floor on Wednesday, McConnell said that it’s “exactly the kind of event that many feared” after the leaking of a draft Supreme Court opinion on overturning Roe v. Wade led to protests outside the homes of Supreme Court justices.

First, just moments ago, the Washington Post published a disturbing report. According to the report, a man in his mid-20s was stopped near the house of a Supreme Court Justice carrying a weapon and burglary tools. He reportedly told police he intended murder the justice..

Reportedly, he indicated he was angry at the decision he thinks the court may reach in an upcoming case in light of the unconscionable leak from a few weeks back. This is where we are. This is where we are, Mr. President, if these reports are correct - an assassination attempt against a sitting justice or something close to it.

This is exactly, exactly why the Senate passed legislation very shortly after the leak to enhance police protection for justices and their families. This is commonsense non-controversial legislation that passed in this chamber, in this chamber unanimously, but House Democrats have spent weeks blocking, blocking the measure that passed here unanimously related to security for Supreme Court justices.

The House’s Democrats have refused to take it up. Now look, Mr. President, that has to change, and it needs to change right now, right now. House Democrats must pass this bill, and they need to do it today.

No more fiddling around with it. They need to pass it today. They need to stop the multi-week blockage of the Supreme Court security bill and pass it before the sun sets today. I’ll have more to say on the subject as the facts continue to unfold.