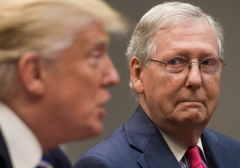 President Donald Trump speaks alongside Senate Majority Leader Mitch McConnell (R), as they hold a meeting about tax reform in the Roosevelt Room of the White House in Washington, DC, September 5, 2017. (Photo by SAUL LOEB/AFP via Getty Images)

(CNSNews.com) – The violent mob who stormed the Capitol on Jan. 6 was fed lies and provoked by President Donald Trump, Senate Majority Leader Mitch McConnell (R-Ky.) said in a speech on the Senate floor on Tuesday.

“The last time the Senate convened, we had just reclaimed the Capitol from violent criminals who tried to stop Congress from doing our duty. The mob was fed lies. They were provoked by the president and other powerful people, and they tried to use fear and violence to stop a specific proceeding of the first branch of the federal government, which they did not like, but we pressed on,” he said.

“We stood together and said an angry mob would not get veto power over the rule of law in our nation, not even for one night. We certified the people’s choice for their 46th president. Tomorrow President-elect Biden and Vice President-elect Harris will be sworn in. We’ll have a safe and successful inaugural right here on the west front of the Capitol, the space that President Bush 41 called “democracy’s front porch,” and then we’ll move forward,” McConnell said.

“Our work for the American people will continue as it has for more than 230 years. There are serious challenges that our nation needs to continue confronting, but there will also be great and hopeful opportunities for us to seize,” the majority leader said.

McConnell said that the November election did not give either side a mandate, and instead, the American people sent the message that they want Democrats and Republicans find “common ground.”

“Certainly, November’s elections did not hand any side a mandate for sweeping ideological change. Americans elected a closely divided Senate, a closely divided House, and a presidential candidate who said he’d represent everyone,” the majority leader said.

“So our marching orders from the American people are clear – we’re to have a robust discussion and seek common ground. We are to pursue bipartisan agreement everywhere we can and check and balance one another respectfully where we must, and through all of this, we must always keep in mind that we’re all Americans,” he said.

McConnell thanked the DOJ for working swiftly to bring offenders to justice in the Capitol riot. He noted that the FBI made at least 100 arrests and the Justice Department has more than 275 people under investigation.

“As I’ve stated, January 6 saw failures of institutions, protocols, and planning. Those failures did not just leave Congress itself exposed. They also left the courageous men and women of the Capitol Police themselves in a totally untenable situation,” he said.

“So today I want to reaffirm the huge respect and gratitude that I have, and I believe all senators have for the men and women of the U.S. Capitol Police – who put their own safety on the line every single day that they clock in and stand guard,” the majority leader added.