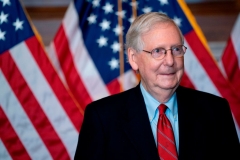 Senate Majority Leader Mitch McConnell, a Republican from Kentucky, stands for a photo at the US Capitol in Washington, DC, on November 9, 2020. (Photo by STEFANI REYNOLDS/POOL/AFP via Getty Images)

(CNSNews.com) – Senate Majority Leader Mitch McConnell (R-Ky.) said Monday that there have been no reports of foreign interference in the 2020 elections, a fact that “slams the door on the embarrassing, irresponsible rhetoric that some Washington Democrats spent four years broadcasting.”

In a speech on the Senate floor, McConnell said this was accomplished despite pressure from Democrats to rewrite election laws, noting that “none of their demands became law.”

President Donald Trump is “100 percent within his rights” to look into allegations of voting irregularities “and weigh his options,” McConnell said.

He also noted that the Constitution does not give “wealthy media corporations” a role in this process, nor does it give the media’s projections and commentary “veto power over the legal rights of any citizens, including the president.”

McConnell called out the Democrats who spent four years refusing to accept the validity of Trump’s election in 2016, saying they shouldn’t lecture the president to “immediately” and “cheerfully accept preliminary election results.”

There is one aspect of last week that has gotten lost, but I want to single out right at the start. By every indication, the 2020 election appears to have been free from meaningful foreign interference. There is no suggestion that our foreign adversaries were allowed to undermine the integrity of our process.

According to the director of the cybersecurity and infrastructure security administration, "We have no evidence any foreign adversary was capable of preventing Americans from voting or changing vote tallies." General Paul Nakasone, the head of the NFA and U.S. Cyber command reported Tuesday night, "The actions we've taken against adversaries have insured they’re not going to interfere in our elections."

“The Trump administration and the Senate spent four years supporting the state and local election authorities on the front lines: new tools and information sharing partnerships, unprecedented coordination, hundreds of millions in new funding, new painful consequences for bad actors like Russia, if they interfere.

The absence of any reports of foreign interference is a ringing endorsement, a ringing endorsement of our bipartisan work, and it slams the door on the embarrassing, irresponsible rhetoric that some Washington Democrats spent four years broadcasting. Too many voices tried to talk on our progress, urged Americans actually not to have confidence and smeared anyone as unpatriotic who opposed far-left proposals to rewrite election laws.

Well, Mr. President, the people who pushed this hysteria could not have more egg on their face than they do right now. None of their demands became law. None of them. The speaker of the house did not get to rewrite election law and yet because of the sensible bipartisan steps that some of us championed, our defenses and countermeasures proved to be in radically better shape than back in 2016.

So it's time, let's talk about where we are now. According to preliminary results, voters across the nation elected and reelected Republican senators to a degree that actually stunned prognosticators. Likewise, the American people have reacted to House Democrats’ radicalism and obstruction by shrinking the speaker’s majority and electing more Republicans, and then there's the presidential race.

“Obviously no states have yet certified their election results. We have at least one or two states that are already on track for a recount, and I believe the president may have legal challenges underway in at least five states. The core principle here is not complicated. In the United States of America, all legal ballots must be counted. Any illegal ballots must not be counted.

The process should be transparent or observable by all sides and the courts are here to work through concerns. Our institutions are actually built for this. We have the system in place to consider concerns, and President Trump is 100% within his rights to look into allegations of irregularities and weigh his legal options. Let's go back 20 years ago.

Twenty years ago, when Florida came down to a very thin margin, we saw Vice President Gore exhaust the legal system and wait to concede until December. More recently, weeks after the media had called President Bush’s reelection in 2004, Democrats baselessly disputed Ohio’s electors and delayed the process here in Congress. In 2016, election law saw recounts or legal challenges in several states.

If any major irregularities occurred this time, of a magnitude that would affect the outcome, then every single American should want them to be brought to light, and if Democrats feel confident they have not occurred, they should have no reason to fear any extra scrutiny. We have the tools and institutions we need to address any concerns.

The president has every right to look into allegations and to request recounts under the law, and notably, the Constitution gives no role in this process to wealthy media corporations. The projections and commentary of the press do not get veto power over the legal rights of any citizen including the president.

Now more broadly, Mr. President, let's not have any lectures, no lectures about how the president should immediately, cheerfully accept preliminary election results from the same characters who just spent four years refusing to accept the validity of the last election and who insinuated that this one would be illegitimate too. If they lost again, only if they lost. So let's have no lectures on the subject from that contention.

In late August, Secretary Hillary Clinton said "Joe Biden should not concede under any circumstances. I think this is going to drag out and he will win it if we don't give an inch." That same month, speaker Pelosi and at the Democratic leader both stated President Trump needs to cheat to win.

In October, when Speaker Pelosi was shopping some conspiracy theory about the postal service, she recklessly said "I have no doubt that the president will lie, cheat, and steal to win the election. "Does this sound like a course that has any credibility whatsoever to say a few legal challenges from president trump represents some kind of crisis?

At this time last week, small business owners and cities across America were boarding up their windows in case President Trump appeared to win and far left mobs decided to reprise their summer rioting. Suffice to say a few legal inquiries from the president do not exactly spell the end of the republic.

Here's two professors from Fordham Law School and New York law school. This is how they put it: "For centuries, we've asked people who are unhappy with their fellow citizens or government agencies and institutions to bring their claims to court." President Trump is "a traditional response that affirms rather than undermines American institutions." This process will reach its resolution. Our system will resolve any recounts or litigation.

In January, the winner of this election will place his hand on a Bible just like it happened every four years since 1793. What we know for sure is that the outcome is guaranteed to delight tens of millions of Americans and disappoint tens of millions of Americans, but we also know that we will wake up on January 21, still blessed to live in the greatest nation the world has ever seen.

And in no small part, that is because we respect the rule of law, we trust our institutions, and neither of those things is outweighed by pronouncements from partisans or the press.

McConnell also welcomed the news that Pfizer has developed a COVID-19 vaccine that is 90 percent effective. He also pointed to the unemployment rate, which has fallen to 6.9 percent.

And now on an entirely different matter, the last several days have brought huge good news in our fight to beat the terrible virus. This morning, one drug manufacturer announced that ongoing trial suggests their candidate for a vaccine may be more than 90% effective. 90% effective.

This is a huge testament to the ingenuity of the American private sector and their global partners and the historic efforts of Congress and Trump administration. We've flattened regulatory roadblocks. we sped up trials, and laid groundwork to distribute a vaccine as fast as possible. Last week, we learned the unemployment rate has fallen 6.9%. 6.9%.

With more than 630,000 new jobs added just in the month of October. Remember, back in the spring time, many experts estimated we would still be saddled with double-digit joblessness through the end of this year. Turns out, the news is a whole lot better. Another testament to the strong economic foundations that Congress and the Trump administration spent three years laying before the pandemic struck.

Most of all, to the resilience, the incredible resilience of the American people. To be clear, our work is not finished. Too many Americans are still suffering economically and infections are climbing across the country. We cannot give up on common sense measures like wearing masks just because we've grown tired of them.

The Senate’s going to have a busy few weeks, I hope our Democratic colleagues will finally put aside their all or nothing obstruction and let the targeted pandemic relief, targeted pandemic relief is what we need, let it move forward. In any event, we will need to fund the government, reach agreement with the House on the National Defense Act and confirm more thoroughly qualified nominees.