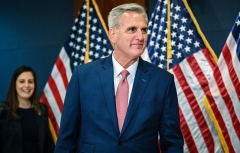 “We are the only Republican entity that can stop this disastrous Biden agenda. Think for one moment. It is official. One party Democrat rule in Washington is finished. We have fired Nancy Pelosi. We have worked hard to earn this agenda. You were right that we worked very hard on getting this majority, but we put the commitment to make out there,” he told Fox News’ “Hannity.”

“We told the American for exactly what we would do, and think about it. The 218th seat that was called tonight was Congressman Mike Garcia, a former Naval Academy F-18 pilot. This is Los Angeles County. This is a seat that Joe Biden carried by 13 points, and we won it, and we still got more good news tonight. Madera just came back in the count for California 13th, and John Duarte had just gone up by 900 votes. So we got about four more seats out there possibly that we can win,” McCarthy said.

The congressman said that one thing about Washington is that “they don't hand the gavels out in small, medium, and large-size.”

“It is one size gravel with the ability to the subpoena and hold this government accountable, secure this border, fight to make us energy independent, give the parents a say in their kids' education and actually look what the DOJ is doing, what that DHS is doing and others, and that is exactly what we are going to. On day one in this House, we will repeal 87,000 new IRS,” McCarthy said.

The congressman said that the House has “the power of the purse,” and “the size of our debt has got to stop.”

“We have got to actually focus on what we did listening to the American public. You’ve got to make an economy that is strong. They are hurting because of inflation. We got to click on this wasteful Washington spending. We got to make ourselves energy independent, and not just energy independent. Let's help our allies. Let's make China dependent on our natural gas,” McCarthy said.

The congressman said that House Republicans have already begun looking into the origins of COVID.

“We want to know the origins of where COVID began so we never have that happen again. Who funded it? How did it get there? We want to know what happened in the last 60 days of Afghanistan. Why didn't the president listen to the military? Creating 13 new Gold Star families that never should have taken place. We have got a number of ways,” McCarthy said.

“Why did the DOJ go after parents and call them the terrorists? How can we have a secretary of homeland calling that this border is secure when you have more than 2.7 individuals illegally coming across? Are the number of people on the terrorist watch list coming into America? What do they have planned? Who are they talking to? And why are they here? That’s just the start,” he said.

McCarthy said that everyone in the Republican Caucus worked for the last year and a half on the Commitment to America.

You’ve watched them put it out to make an economy that’s strong, a nation that’s safe, a future that’s built on freedom and a government that’s held accountable. We just had what you would think is a primary with more than 84% of the conference I was able to win. We had that debate. Now is the time to move forward, and you’re correct.

To really save this nation, to work for the American people, we have to work as a team or we will lose as individuals, and I believe this conference will rally together, because we will have a tough time, but if we listen and work harder together, we can make the next century the American century. We are the only ones holding against this disastrous agenda by Joe Biden, but think for one moment.

Four years, I was elected leader. We had just lost the majority - less than 200 seats, and for the last two election cycles, we have done nothing but win seats. The Republicans in the Senate lost. The Republicans and the government less but it is a leap in the house. We are the last line of defense so we can't take this personal. We can't go out and make our own individual ideas.