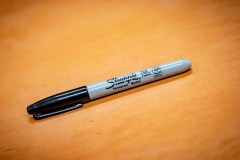 A Sharpie brand marker sits on a table in Phoenix, Arizona, on November 5, 2020. (Photo by OLIVIER TOURON/AFP via Getty Images)

(CNSNews.com) – A lawsuit in Arizona claims 80 percent of voters at a polling location in Maricopa County, Ariz., had their ballots rejected because of a Sharpie issue.

The court complaint reads that a voter ‘completed ballot with the provided Sharpie. While completing it she noticed ink was bleeding through. The ballot box failed to properly register her vote, causing a poll worker to cancel her ballot in the presence of the plaintiff. the plaintiff requested a new ballot but upon information and belief, upon consultation with the Maricopa County reorders office, the poll workers refused to provide her with one.’

A Declaration from a poll worker backs up the claim saying ballots that were rejected by one machine were tried on the other tabulation machine and in different orientations always without success. For these reasons I believe that the issue was caused by the use of sharpies at the polling location. I would estimate that approximately 80% of voters at this polling location experienced the issue.

Democratic presidential nominee Joe Biden was in the lead in Arizona 50 percent to President Donald Trump’s 48.6 percent as of Friday morning.

Election law attorney Christian Adams, who serves as president of the Public Interest Legal Foundation and once served as general counsel and former DOJ voting section attorney under Presidents George W. Bush and Barack Obama, is representing the plaintiffs in the case.

“This is a case to get somebody's right to vote vindicated. Mrs. Aguilera attempted to vote, and she watched this happen. She watched her ballot rejected because of the Sharpie. I know a lot of people want to try to debunk the Sharpie issue. These are sworn affidavits. People say there's no evidence of this, Maria. These are affidavits of an election official,” Adams told Fox Business’s “Mornings with Maria Bartiromo” on Friday.

“Joshua Banco is one of the individuals that we submitted an affidavit for, and he says he was in charge of the poll, and he was watching this happen with ballots not going through because of the Sharpie bleeding through the paper. It's interesting that there were introductions by Arizona and Maricopa County to use a ball-point pen. They told people, use a ball-point pen, and Sharpies were being handed out to voters,” he said.

As to whether it was coordinated, Adams said, “First of all, in Arizona it doesn't have to be coordinated. We just want somebody's right to vote vindicated. The chaos ensued with the Sharpies, and so in Arizona at least this is about right to vote case. It’s ironic, -- the Arizona Democratic Party with Perkins Coie - Hillary and the Democrats' lawyer - have actually intervened in the case to try to stop voting, to try to stop our client from having a right to vote.

“We always thought it was all about the right to vote. In Arizona, the Democrats clearly don't want the right to vote vindicated. Going to the other states, it doesn’t have to be coordinated. The mail ballot chaos that was implemented in 2020 was going to happen this way. We have been predicting this from the moment the left-wing groups started trying to urge us to go to mail-in balloting,” he said.

“I’ve been predicting this that when you pump the millions of ballots into the mail system, bad things happen. In Georgia, we saw that they found ballots came in late. Well, we knew that was going to happen. Ballots get rejected because of defects. We knew that was going to happen, but in Detroit and Philadelphia, ballots seem to be growing like mushrooms overnight. They certainly appear at 4:00 o'clock in the morning and then they get counted before anybody can do anything,” Adams added.

As far as Trump’s legal fight and whether it will be successful, Adams said a voter fraud case would be “very hard” and could take months, even years.

“It's very hard to do a voter fraud case. I did one at the Justice Department that we proved in federal court that took months and years actually to build. It's a very difficult challenge to do that. There are things that could be done right now that they are not doing. I will say that, Maria,” he said.

“There's data out there that could show problems that I don't think is being used. You know, it's one thing to say someone moved away but quite it’s quite another to -- to show they are dead, and we have been documenting this in places like Nevada, if you look at the public and legal foundation, video we did in Nevada of people who live in vacant lots, it's out there, just Google it. Same in Pennsylvania, we did a video about people who live in vacant lots so this is a big problem,” Adams said.