Levin: ‘This Warrant Is Unconstitutional’ 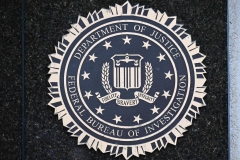 The seal of the Federal Bureau of Investigation is seen outside of its headquarters in Washington, DC on August 15, 2022. (Photo by MANDEL NGAN/AFP via Getty Images)

Furthermore, he said that the Espionage Act doesn’t apply to a president, regardless of what these federal prosecutors are trying to concoct.”

And if I were the movements in the case, I would be bringing all of these articles where unnamed sources are leaking information about the affidavit. I want to get to something here, first of all, I have a question.

He doesn’t answer to the FBI Department of Justice or some bureaucrat with a regulation that says, no, no, he can't declassify ‘til he fills out this paperwork and hits all the boxes. He’s the executive branch.

That's why the 1917 Espionage Act cannot be used against a sitting president. If he can declassify and classify at will and do so as the head of the executive branch, he can't be held criminally liable for taking documents with him even classify documents. Why? Because if he can declassify them at will, he can take them at will, but if I am wrong, then I have a question.

If I’m wrong, because the law itself, the Espionage Act, people ought to actually try and read it rather than read what the press says about it. Here's the section. Listen to this really carefully. Whoever being entrusted - I am reading a relevant part - whoever being entrusted of any documents relating to the national defense through gross negligence, remember Hillary?

Permits the same to be removed from its proper place of custody shall be punished and so forth and so on. If Trump is - and he’s not – but if Trump is guilty because he has classified information, everyone along the chain of custody is guilty, every single person. That’s how absurd this is. Why?

Because from the person who created the document that handed it to somebody else that brought it to the Oval Office, who removed it or failed to remove it, and so forth and so on, they violated part E of section 1 of the Espionage Act. Whoever being entrusted. You have an obligation to secure it and bring it back to its proper place of custody. Well, they failed to do that, didn't they?

So the espionage act does not apply to a president regardless of what these federal prosecutors are trying to concoct, but there is more. Let's look at the warrant. The warrant is extremely broad.

Then go to the next part. Any government and/or presidential records created between January 2017 and January 2021. You could go online right now and buy a signed letter by a president to a constituent or somebody on White House stationery. This presumably would include that, but this is unconstitutional.
This warrant is unconstitutional, and I don't care if a master signed off on it or not. That does not make them Solomon, and I will tell you why. We have the Fourth Amendment in America.

The right of the people to be secure in their persons, houses, and effects against unreasonable searches and seizures shall not be violated, and no warrant shall issue but upon probable cause supported by oath or affirmation, and particularly - the word - particularly describing the place to be searched and the persons or things to be seized. No general warrants.

We’re gonna go through your purse. Well what-- We don’t have to tell you. The Fourth Amendment is supposed to prevent that. This language in and of itself in this warrant violates the Fourth Amendment of the Constitution, and there’s a leak in ‘Newsweek’ tonight where there are two intelligence officers because the government is trying to get its message out and they telling different stories.

They said they wanted as broad of an investigation as possible to grab as much paper as they could. There it is. There’s the case in front of the judge tomorrow. The government’s leaking. This warrant that you issued was unconstitutional. The American people have a right to see everything. This is not supposed to be done to a former president of the United States.

This is unprecedented, and not because it’s Donald Trump, but because it is Merrick Garland, Matthew Graves as the U.S. attorney, and a cabal of Stalinist leftists at the Department of Justice that will stop at nothing to destroy this country. That's it. I'm done.