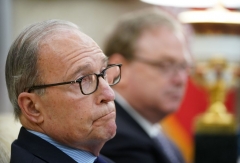 Speaking to Fox News’ “America’s Newsroom,” Kudlow was asked to respond to Chief Actuary of Social Security Steven Goss, who said that eliminating payroll taxes would lead to the permanent depletion of the Social Security trust in three years.

“There is no plan to eliminate Social Security taxes,” Kudlow emphasized. “I don't know where that idea came from. It is not true. President Trump is, however, proposing to defer payroll taxes between now and year end. Let's say September 1st through December 31st. That would give wages – that would give middle income workers about an $1100 weekly wage increase, okay, over the period - $1100.

“That will be replaced in terms of the Social Security Trust Fund. We will bond that out, and we will exchange notes with the trust fund. They are called non-marketable securities. This happens all the time. Democrats who cut the payroll tax in the past went through exactly the same exercise, but here’s the key thing,” he said.

Kudlow said that cutting payroll taxes will not only help people who are working during the pandemic, but it will also provide an incentive for people who are not employed to seek employment, knowing they’ll bring home more in take home pay.

“Cutting the payroll tax will affect over 140 million Americans who were able to continue to work. They are like heroes during this pandemic, and it will provide an incentive not only for them to work but for others to come back to work because of this big wage increase. So I completely disagree. I don't know all these outlandish ideas and extensions and extrapolations. It is a very straight forward pro-growth, pro-job, pro-wage increase for middle-income workers,” he said.

When asked to confirm that he’s saying there’s no plan to cut payroll taxes, Kudlow said, “No, none, zero. That’s a different subject. The president has said a million times he will protect the Social Security system. He said that a million times, but he would like a permanent deferral. In other words, he would prefer and will do everything he can to find ways and means to do this, to forgive the deferral.

“So therefore, those employees and employers won't have to worry about added tax liabilities in the future. President wants to give 6 ¼ percent payroll tax cut for higher wages and will defer the payback permanently. That's his goal. I'll bet you he’ll get it after the election,” he said.

When asked to clarify the president’s words, “We will be - on the assumption I win – we are going to be terminating the payroll tax after the beginning of the new year,” Kudlow said, “I understood that to simply mean that we will permanently defer the payback of that tax cut. That's all that meant. He wasn't talking about a generalized Social Security tax cut. He wants to protect Social Security.

“Look, Sandra, we're coming out of a rough pandemic contraction. The economy’s rebounding beautifully. There’s still a lot of hardship out there. We have much work to do. This would absolutely help middle income, lower middle income folks the most,” he said.

Former Council of Economic Advisers Chair Austan Goolsbee, who served the Obama administration, told Fox News, that the Trump administration “cut taxes $2 trillion for high income people and big corporations and we did not get a massive magic bean stalk beans boom from that. I just think this whole trickle-down theory was disproven by the tax cut that Donald Trump passed.”

Sandra, they had the largest increases in wages. In fact, the bottom group had the single largest increase in wages, much greater than the so-called top 1%. Now, people bickered with Kevin Hassett and I when we proposed this and when the president argued for it, but that's exactly how it turned out - lower corporate taxes, small business taxes, income taxes, let's not include things like childcare credits which are so very important.

The biggest gainers in wages were the middle income and the lower middle income. Look, we had before the pandemic a 3 1/2% unemployment rate. It's incredible. No inflation and strong growth, almost 3%, and employment was rising substantially. Very few economists predicted that. That's exactly what happened. It was across the board. Not only the blue collar boom but African-Americans, Hispanics, Asian, women. They all had record low unemployment rates. You can't do much better than that.

“Roughly 40% of the taxes paid in this country come from that tiny is sliver at the top. Second point, we're coming out of this tough pandemic contraction. We still have to deal with a lot of hardship and get people back to work and get this economy booming again although I think it’s gonna grow 20% in the second half,” he said.

“Forget supply side, demand side, whatever, Democrat, Republican. Who in their right mind would want to raise taxes? I mean an honest Keynesian would say spend more and tax less. Why do you want to pick the pockets of taxpayers in order to support unbelievable dreams of government spending? When I look at Mr. Biden's numbers, I see $4 trillion in tax hikes, which itself is extraordinary but I see over $6 trillion in spending,” Kudlow added.