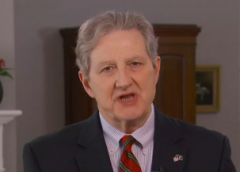 (CNSNews.com) - Sen. John Kennedy (R-La.) told Fox News’ “Sunday Morning Futures” that he hopes that former Vice President Joe Biden takes House Speaker Nancy Pelosi’s (D-Calif.) advice not to debate President Donald Trump, because if he does, he’ll be a dead man walking when it comes to his presidential aspirations.

“Right before he went into battle, some lieutenant probably told Custer don't worry about it, we can take these guys. That's the category I put Speaker Pelosi's advice in. I hope Vice President Biden takes it, because if he takes it and doesn't debate, he's a walking dead man politically,” Kennedy said.

“American people aren't going to vote for a president without seeing him. You can't stay in your hidey hole. You've got to get out and see people and debate. I think the speaker's been tripping to think that the American people are going to tolerate -- having a party nominee not debate for the most important powerful job in the world, but having said it, you know, the politician in me says, well, I hope the vice president takes the speaker's advice,” he said.

As CNSNews.com previously reported, Pelosi said she didn’t think there should be any debates.

“I thought what he (Trump) did in 2016 was disgraceful” and “he will probably act in a way that is beneath the dignity of the presidency. He does that every day,” Pelosi said. “I don’t think he should dignify that conversation with Donald Trump.”

Host Maria Bartiromo said there are reports that the GOP could come back with a scaled-back COVID-19 stimulus package, but Pelosi says it’s still not enough money.

Asked to comment, Kennedy said, “Well, you know the Senate. How can I put this? The Senate only works when not everybody is nuts at the same time, but right now the Senate Republicans, I think we've got our act together. We've been meeting by teleconference every single day to put together a bill. We got it put together.

“I think it will, it'll get -- I'm not saying that every member of the Republican delegation will vote for it, but we'll get between 40-50 votes, and now it's up to Senator Schumer and Speaker Pelosi. They either want to help the American people or they don't, but this bill would provide help for businesses, for people in unemployment compensation. It’d get our schools open. It would provide more testing. It would give support to the post office,” he said.

“It's a good bill, and I hope that -- if Chuck, Senator Schumer will allow it, I guarantee you we will get enough Democratic votes to pass this thing. I just don't know if he and Speaker Pelosi will allow it because they're concentrating on the next election instead of the next generation,” the senator said.

“Well, it'll take your breath away, Maria. This thing cut a path of destruction from south Louisiana to north Louisiana about 400 miles. We've got probably -- it's probably affected a million to two million people. They've been chewed up, spit out and stepped on, and I wanted the president to see it,” Kennedy said.

“He didn't have to come yesterday. He’s gonna carry Louisiana, but he came, and he brought his big guns with him - Secretary Wolf from Homeland Security and the head of FEMA and Dr. John Fleming and, best of all, Chief of Staff Mark Meadows, and I wanted him to see it firsthand, what we're up against,” the senator said.

“This is going to be a multi-year recovery. Now, we'll recover. The people of Louisiana are-- we're tough as a boot, but I don't want anybody to think, well, this is just, you know, rake a few leaves and we're back to normal. This is going to take a while,” he added.