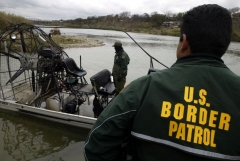 (CNSNews.com) - Reps. John Katko (R-N.Y.) and Henry Cuellar (D-Texas) have introduced a bill that requires the Department of Homeland Security (DHS) to establish a plan to address the migrant surge at the border with metrics in place to activate access to supplemental funds.

The Border Surge Response and Resilience Act would “hold interagency components accountable to mitigate bottlenecks that take law enforcement off the line and result in children being held in CBP custody for longer than they should,” according to a press release.

“It's because of what happened this time when the border surge happened. We weren't ready, and we didn't anticipate things and so what this bill basically does is directs the Department of Homeland Security to have a plan in place in advance, have certain metrics sets so when those metrics are hit, there's a triggering mechanism that gives them access to funds, and those funds are separate funds that are being kept in a trust, if you will, and to be used only to deal with these situations,” Katko told Fox Business’s “Mornings with Maria Bartiromo” on Thursday.

“What they're doing right now is taking funds from Customs and Border Patrol operations, and including paying Border Patrol agents, so if we don't do a supplemental by the end of the year, they're not going to get paid. That's not how to operate things. We need to anticipate better, and we need to be ready better, and that's what this bill does, and I'm glad to work with Henry. You notice we get along so well. We even wore the same suits today,” he said.

“It is critical that the Department of Homeland Security (DHS) is proactive and develops a strategy to adequately manage large migration flows at our southern border,” Cuellar said in a press release.

“This bipartisan legislation will allow the federal government to employ a whole-of-government approach to create a response framework that anticipates migration surges, allowing them to quickly shift resources and take immediate action to mitigate a humanitarian crisis,” the congressman said.

“You know, we saw a surge in 2014, 2019, and John is right. We've seen this before, so what we need to do is to make sure that we have a plan, a strategy, because if we're not, then we are just going to be reactive instead of proactive, and John hit it right on the nail. You've got to have a strategy. You've got to have the metrics,” Cuellar told “Mornings with Maria Bartiromo.

“You've got to make sure you match the results, because otherwise, we're just going to be behind every other step. That’s what's happening at the border,” the congressman said.

“You will see there will be a supplemental request this summer where HHS and Homeland will ask us for probably two, three, $4 billion, but if we had something in place that we have that fund just like FEMA is ready for a hurricane, or for any disaster, then I think we will be more efficient in doing that, so I certainly want to thank John for his thinking and thoughtful work on this bill,” he added.

When asked whether he’s getting pressure from his Democratic colleagues for working with Republican lawmakers to address the issue, Cuellar said, “No, they're not. At least to me they haven't said anything, because look, I think they know me.

“I've always been bipartisan, and I think bipartisan is something that's so important, and this is why John and I are rolling up our sleeves, to get to the work. We just can't talk about what's happening at the border. You got to come up with real practical solutions. and if you want to see a practical solution, this is what John and I have done here today,” he said.