Jordan: Dems Out to Get AG Since He Said Trump Campaign Was Spied On 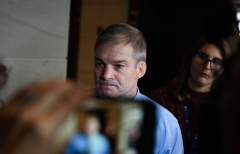 show up for closed door testimony during the impeachment inquiry into US President Donald Trump in Washington, DC on November 4, 2019. (Photo by ANDREW CABALLERO-REYNOLDS/AFP via Getty Images)

(CNSNews.com) - Rep. Jim Jordan (R-Ohio) told “Fox News at Night” on Monday that Democrats have been out to get Attorney General Bill Barr ever since he used the word “spying” when testifying before the Senate in characterizing what the Obama administration did to the Trump campaign.

“Bill Barr's commitment is to the rule of law and defending the Constitution. The Democrats have been out to get him ever since a year ago, a year ago in April, Shannon, when he used the word spying in a hearing in front of the United States Senate. Ever since he called it what it was, the Obama-Biden administration spying on the Trump campaign, we now know that's exactly what they did,” he said.

“Ever since he was willing and had the courage to tell the truth, they've been out to get them, so much so that they just filed articles of impeachment against him three weeks ago. So Bill Barr is trying to clean up the politics from the previous administration, from the Obama-Biden administration where for political reasons they went up to the Trump campaign,” Jordan said.

“He's trying to clean that up, adhere to the rule of law and for that is getting attacked by these Democrats. Sure that's what's going to happen tomorrow, but Bill Barr’s going to do a great job,” the congressman said.

“Michael Flynn was the former defense intelligence head. He’s going to go into the Trump administration as the national security advisor to President Trump. He’ll figure it out. We have to stop them, and you know that that's what they tried to do. That's what they did, because they say so in the notes from Bill Priestap, where he says, what's our goal? To get him to lie so we can fire him, or prosecute him? They did all that,” he said.

“So for them to accuse Bill Barr of anything but adhering to the rule of law and doing the right thing, particularly in the Michael Flynn case is just ridiculous. The American people understand what they did to that three-star general who served our country for 30 years, how wrong it was, and Bill Barr, thank goodness, he said these charges should be dropped. Let's hope the judge, Judge Sullivan drops the charges here soon and they let Mike Flynn alone for a while, for goodness sake,” the congressman added.

Bream also asked Jordan about House Judiciary Chairman Jerrold Nadler’s (D-N.Y.) assertion that it’s a myth that Antifa is behind the violence during protests in Portland, Ore.

“But remember, it was just three and a half weeks ago where Mr. Nadler on the House floor in a debate with us says Antifa is imaginary, so at least is consistent, He’s consistently wrong about this terror organization that President Trump has rightly called the terror organization,” the congressman said.

“They are very real. They are very dangerous. Bill Barr knows it. That's one other reason why the Democrats are out to get Bill Barr, because he's called it accurately and truthfully,” he said.