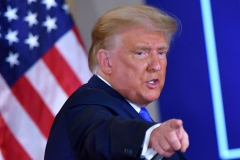 (CNSNews.com) - Former Arkansas Gov. Mike Huckabee on Tuesday called the Democrats’ quest to impeach President Donald Trump again when he only has days left in office is “just a vindictive act of political theater.”

“This is the first president in history where they talked about impeachment before he got sworn in. They talked about impeachment the entire four years he was president, and now they want to impeach him after he leaves office. I think the Democrats are discrediting themselves, but more importantly they’re hurting the country,” Huckabee said in an interview on Fox News’s “Outnumbered Overtime.”

The governor said that if Democrats really believed in President-elect Joe Biden’s agenda, they would clear the table and let him go to work.

“If they really believe Joe Biden has a great agenda that's going to help America, then clear this off the table and let him go do his work. What this is going to do is further divide the country. It's going to do anything but bring the unity that Joe Biden has been talking about,” Huckabee said.

“This is just a vindictive act of political theater, and they need to just recognize Donald Trump's going to be gone in less than a week. So give it a rest. Ease up. Go do something productive. Pass a jobs bill, a road bill. Do something, but this isn't it,” he said.

Host Martha MacCallum pointed to an editorial in the Wall Street Journal by Bill McGurn, former speechwriter for President George W. Bush, questioning whether Biden really will be everyone’s president and speaking against efforts to lump all Trump supporters in with those who took part in riots at the U.S. Capitol.

McGurn said that people who voted for Trump want to be separated from those who rioted last week, and he pointed out that the rioters did more damage to Trump “than the Left could ever do.”

“The most important thing we have to observe is that every single person I know has condemned the actions of that handful that turned into a mob at the Capitol. There were tens of thousands of people that weren't part of that. They went down there. They peacefully marched, and they didn’t break anything. They didn’t hit anybody. They didn't even curse at anyone,” he said.

“They just went, and some of them were bewildered by what they saw happening, and they went back to their hotels or went home, but the fact is there were some people who were just nut cases who did stupid things, criminal things. They were engaged in a mob action of anarchy, but we’ve all condemned them, so what more do we need to do?” Huckabee said.

“I think Bill McGurn is quite right that there's a sense in which people's condescending attitude, those among the elites who make fun of people who voted for Trump as if they’re the folks that go to Olive Garden and stay at the Holiday Inn, and the people who say that are more content to just sit and nibble cheese and sip wine in a Georgetown cocktail party and talk about how horrible all these Trump voters are,” he said.

“That's half of America. They might want to realize that maybe we're not that horrible a bunch of people. We just have different viewpoints, and last time I checked, in America, that was supposed to be okay,” Huckabee said.