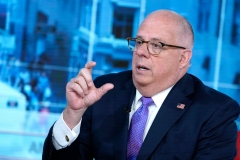 (CNSNews.com) - After the mob attack at the U.S. Capitol last week, the Republican Party will have to decide whether it will return to the party of Abraham Lincoln and Ronald Reagan or “keep heading down this path of worshipping at the altar of Donald Trump,” Maryland Gov. Larry Hogan told CNN’s “State of the Union with Jake Tapper” on Sunday.

Tapper said that members of Congress “gave credibility to the big lie” that the election was stolen, and he asked the Republican governor what should happen to Trump.

“Well, look, right after the election, I gave a major address at the Lincoln -- at the Reagan Institute, where I said, we -- this is a time for choosing in our party, and you have to decide if we're going to return to the party of Lincoln and Reagan, or we're going to keep heading down this path of worshipping at the altar of Donald Trump,” Hogan said.

“And a lot of people, I think, chose wrongly. People in Congress, I'm -- quite frankly, as a lifelong Republican who was a chairman of Youth for Reagan, who's dedicated my life to the Republican Party, I'm embarrassed and ashamed of some of the members of Congress, some of the senators for their actions, especially after this attack on the Capitol, that they continued to head in that direction,” he said.

“I think history will decide how they're remembered and what their fate is going to be in the party, and you have to decide if we're going to return to the party of Lincoln and Reagan, or we're going to keep heading down this path of worshipping at the altar of Donald Trump,” the governor said.

When asked whether the president has blood on his hands, Hogan said, “There is no question in my mind that he was responsible for inciting this riotous mob. This was an insurrection, and they stormed the Capitol and threatened to kill the vice president and put the lives of people in danger, and he had a huge part, a huge role to play in that,”.

Tapper noted that Hogan mobilized the Maryland National Guard immediately after the attack on the U.S. Capitol but wasn’t able to send them into D.C. for nearly two hours because he couldn’t get authorization.

“According to the Pentagon, acting Defense Secretary Christopher Miller did not formally authorize the deployment of out-of-state National Guard units until 5:45, three hours after D.C. officials asked for help,” Tapper said.

When asked why Miller didn’t act sooner, Hogan said, “I can't speak as to what was going on the other end of the line back at the Pentagon or in the White House. All -- I can tell you that, within -- I was in the middle of a meeting when my chief of staff came in and said the Capitol was under attack.

“We were in contact with the mayor's office, who requested assistance. We immediately sent police assistance. I immediately called up the National Guard. It's a little bit of a tricky situation. In most cases, one governor could send his National Guard into another state to help another one, but, in D.C., only the Defense Department can do that,” the governor said.

“So, our Guard mobilized and was ready, but we couldn't actually cross over the border into D.C. without the OK, and that was quite some time. We kept running it up the flagpole, our generals talking to the National Guard generals, and, eventually, I got a call from Ryan McCarthy, the secretary of the Army, asking if we could come into the city, but we had already been mobilizing,” he said.

Tapper pointed out that it’s because D.C. doesn’t have statehood, “even though we have a population bigger than several states. Therefore, we don't have a governor.”

The CNN host said Trump refused to “condemn the terrorists,” didn’t say a word about the dead Capitol Police officer and refuses to have the flag flown at half-staff at the White House in honor of Officer Brian Sicknick.

“He told the terrorists: ‘We love you. You're very special.’ It's very clear that his sympathies are with the terrorists, not with the victims of the terrorists. Was acting Secretary Miller of the Pentagon acting on that by not letting you send the National Guard in?” Tapper asked.

“I think we're going to figure that out, Jake, in the after-action report. I don't know the answer to that question. All I know is that we were trying to get answers, and we weren't getting answers. It could have been just the fog of what's going on. I mean, I'd heard some talk about, look, the National Guard is not the first line of defense,” Hogan said.

“The specially trained police are, because the Guard is not really trained for that. I don't know all the reasons for the delay. I can just tell you that we were taking actions immediately. We were ready, and there was a delay, and I was getting called from the leaders of Congress pleading with me to get our Guard into the city, and we were mobilizing to do that, and we were waiting to get the OK,” the governor said.

When asked why it took until the next morning for the first Maryland National Guard units to arrive in D.C., Hogan said it takes 12 hours for Guard units to mobilize.

“These are folks that are doing something else, and they have to pack their bags, get their uniforms, show at the armories. We were the very first ones to arrive in the city, and so those extra three hours or so that we had to get ready certainly helped us get in there a little sooner, and be the first ones,” he said.

“But the big issue is, why were the Capitol Police and the federal law enforcement agencies not prepared for this, and why were we coming in to do a cleanup operation afterwards?” the governor said.