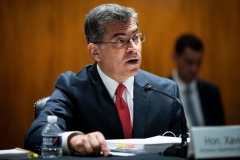 Secretary of Health and Human Services (HHS) Xavier Becerra testifies before a Senate Appropriations Subcommittee hearing titled "The President's Fiscal Year 2022 Budget Request for the US Department of HHS," in Washington, DC, on June 9, 2021. (Photo by AL DRAGO/AFP via Getty Images)

(CNSNews.com) – Health and Human Services Secretary Xavier Becerra on Wednesday refused to commit not to use taxpayer funding to pay for partial-birth abortion.

During a House Committee on Education and Labor hearing examining the policies and priorities of HHS, Rep. Jim Banks (R-Ind.) asked Becerra, “Mr. Secretary, your budget proposal is the first budget proposal in 45 years that doesn’t include the Hyde amendment and Hyde amendment protections preventing taxpayer funds to go toward paying for abortions.

“If that’s true, if that is the case as it appears to be, that would make your and the Biden administration the most pro-abortion administration in history of this country, so what I want to know right now, and I wonder if you would commit to is if you will commit to never directing taxpayer funds to go toward paying for partial birth abortion,” Banks said.

BECERRA: What I can try to make sure I do is guarantee to you that we’re going to follow the law. As I just finished saying to Congresswoman Adams, we want to make sure we’re helping women be healthy and stay healthy if they’re going through pregnancy, and so what I can—

BANKS: Mr. Secretary, can we expect you to commit to not funneling money toward paying for partial birth abortions?

BECERRA: We will not send money anywhere we’re not allowed to by law, Congressman. We will make sure that we enforce the law and provide the protections and services that Americans are entitled to, including women.

BANKS: Mr. Secretary, I’ll ask you again. Will you commit to not sending our taxpayer dollars to go toward funding partial-birth abortion?

BECERRA: Congressman, you’re asking a question, and what I must say to is that there are scores of low-income women in America who are not receiving the care that they need and are entitled to. We’re going to make sure that we leave no one behind, but we’re going to do that by following the law, and so if you’re a woman in America, we want to make sure that you have access to reproductive services that you’re entitled to under the law.

When challenged to disavow statements by the head of the Conscience and Religious Freedom Division within HHS’s Office of Civil Rights that Banks said were “attacks on the career professionals” of that division, Becerra said he was unaware of her remarks and would take a look at it.

BANKS: The HHS Office for Civil Rights contains a Conscience and Religious Freedom Division that enforces nearly 2 dozen federal laws protecting conscience and health care and human services, including protections against coerced participation in abortion and assisted suicide. That division is currently being overseen by a political appointee named Laura Durso with a long history of left-wing activism.

Here is a sampling of some of the outrageous things that Laura Durso has publicly said about the conscience and religious freedom division. In a tweet, she said the division ‘sends shivers down my spine,’ and that ‘any policies that come from it will only enable discrimination and pain.’

In an interview, she called formation of the division ‘insulting at best’ and falsely said that the division only represents ‘Christian beliefs’ and is ‘trying to impose them on the country and that they don’t care about the vulnerable and shield people who object to transgender people even existing.’ In the same interview, she enthusiastically agreed with the host who said that the division was ‘an office that makes people feel like crap and is the most immoral thing that we can think of.’

Finally, in another tweet, she said that the work of the division was like those who ‘stood with rapists over survivors.’ Mr. Secretary, do you disavow any of these outrageous statements and attacks on career professionals of the division made by Ms. Durso?

BECERRA: Congressman, you’re presenting me something that I’ve never seen, and I can certainly take a look at that, but what I will tell you is that each and every person in the Department of Health and Human Services, especially in the Office of Civil Rights has an obligation to protect the constitutional civil rights of all Americans, and we’re going to do that. We’re going to make sure that the work we do—

BANKS: Will you commit to removing a biased ideologue like Ms. Durso from any decision-making related to the Conscience and Religious Freedom Division who obviously has a bias against what the division does?

BECERRA: Congressman, I look forward to working with you to take a look at some of these issues. You’re presenting me something I’ve not heard of, and I don’t—having been an attorney general for the state of California, I don’t proceed based on something that I’m not aware of. We’re going to make sure everyone in our department does the work that’s required, and I guarantee you that the people that are right now at the Office of Civil Rights understand their obligation is to protect people’s civil and constitutional rights including their conscience rights, religious freedom rights, and I think that everybody in our division at civil rights and within our department does exactly that, and if there isn’t someone who does that, we’ll get to the bottom of it.